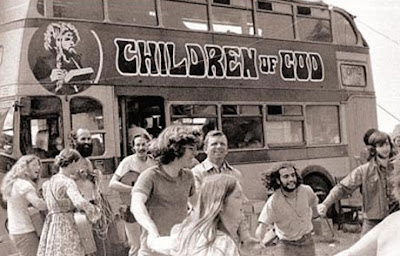 No question about it, religion has given the world some beautiful music, from Gregorian chants to the Hallelujah Choral to Sister Rosetta Tharpe.

It's also given us stuff like you'll hear in the videos below.

These are musical expressions by members of various "alternative" faiths some call "cults."

Warning: If you listen to them all, you might have to be deprogrammed.

Let's have a listen, starting with Jeremy Spencer, who was an original member of Fleetwood Mac (back in the pre-Buckingham/Nicks days when they were a British blues band.)

One day in February 1971 while Fleetwood Mac was in Los Angeles for a gig at the Whiskey a Go Go, Spencer slipped away. He met up with members of a group called The Children of God and rather suddenly decided he wanted to join the group. So he did. He never went back to Fleetwood Mac. 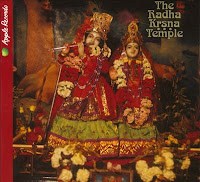 The Children of God seemed to be everywhere in the early '70s. I was frequently accosted by them in my early years at the University of New Mexico. The group was known for a controversial recruiting technique called "Flirty Fishing," which basically involved young female members using sex to entice new male members into joining. That never happened to me. All I got were hairy, stinky guys who wanted to rant about their crazy apocalyptic visions of the nuclear bombs stored deep in the Manzano Mountains.

Anyway, here's Jeremy Spencer singing one of his religious songs. I'm not sure how old it is. These days Spencer has white hair and less of it.

One day in the late 70s or early '80s when I was working at Stag Tobacoonists, this hairy, barefoot guy wearing a white robe came in the store and bought a bunch of Royal Jamaica cigars. Jesus, he told us, likes Royal Jamaicas. All us Stag employees were big fans of RJs, so we just agreed with him.

He told us he was a member of a church called The Christ Family.

During the next few years I would see several members of the Christ Family -- you could recognize them by their white robes and bare feet -- on the streets of Santa Fe. When I started writing a weekly features column for the Santa Fe Reporter in the early '80s, I decided to interview members of the group.

I found a half dozen or so members in a bus near the Santa Fe River off Guadalupe Street. They welcomed me aboard, but as the interview wore on, it was obvious they weren't welcoming my questions.

They told me that they lived celibate, vegetarian lives because Christ Family was against "killing, sex and materialism." They told me their messiah was someone named Lightning Amen (who I later learned was fond of good cigars. I assume those included Royal Jamaicas.)

At one point the man who was doing nearly all the talking became so angry with my questions, he was turning read in the face. I asked him why he was so upset. His answer:

"BECAUSE YOU ARE KILLING, SEX AND MATERIALISM!"

He didn't laugh when I joked, "That's what she said last night."

Lightning Amen -- real name Charles McHugh -- died about five years ago. In 1987 he was sentenced to five years in prison for drug charges, including the transportation and possession for sale of methamphetamines.

But at least some of the Christ Family is still together in Helmut, Calif. Here is one of their songs.

[UPDATE: 11-14-15 Some time after I posted this, this and all the other Christ Family videos disappeared off of YouTube. I don't know why.]

Next is Scientology's answer to "We Are the World." You might have heard this on the HBO documentary, Going Clear.


And then there are the Hare Krishnas. They definitely had a presence in Santa Fe and Albuquerque in the late 60s and early '70s. They had a storefront temple on Water Street when I was at Mid High school here (in the same building that used to house the Adobe Laundromat.) A couple of times I stopped in to yack with them at the temple. Unlike the Christ Family, they never yelled at me when I asked questions. No heavy proselytizing either, though they always invited me to their Sunday feasts. (I never went.)

This song comes from the album The Radha Krsna Temple, which was produced by none other than George Harrison. And unlike the other songs posted here, it doesn't suck..

This next Krishna chant goes on for nearly seven hours. Give it a listen if you have the time.


Know any more "cult classics" from other "alternative" religions? Post links in the comments section.