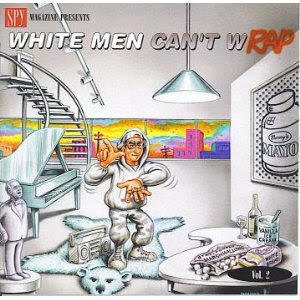 Decades before before The Sugar Hill Gang -- years before The Last Poets or Gil Scott Heron even -- courageous, (or at least shameless) Caucasians created their own forms of rap music that swept the nation.

Or at least made for some pretty weird novelty records.

The late, lamented Spy Magazine released a hilarious compilation called White Men Can't Wrap, which showcased many of the classics of the genre, some of which are included below.

The collection included liner notes by none other than Irwin Chusid, perhaps the nation's greatest expert on "outsider" music, and a major fan of all sorts of strange and wonderful songs.
Chusid sayeth:

The stuff they taught you in the grade-school gymnasium, that cornball mountain music with the do-si-dos - it was all about sex and forbidden behavior! It was the roots of today's white rap culture. Herewith, a tribute." (Thanks to the ever-excellent Music for Maniacs blog for transcribing that for their post about White Men Can't Wrap a few years ago.)

Besides its roots in square-dance calling as Chusid notes, another major manifestation of white rap was "talking blues," Folksingers like woody Guthrie and the young Bob Dylan loved the style and included several talking blues tunes in their repertoires.

But the style goes back at least to the mid-20s. South Carolina entertainer Chris Bouchillon recorded a song called "Talking Blues' in 1926. His song "Born in Hard Luck" is even better.


Hank Williams played his own style of talking blues also, in is guise as Luke the Drifter.

But hillbilly singers were not the only purveyors of white rap. In the late '50s comedian Lenny Bruce made this beatnik-jazz contribution.

By the 1960s, white rap was in full blossom. There were big radio hits like "Big Bad John" by Jimmy Dean, "Old Rivers by Walter Brennan," "Ringo by Lorne Green and "Gallant Men," a patriotic march by Everett McKinley Dirksen, whose day job at the time was minority leader of the U.S. Senate. (I posted a YouTube of that on a previous Wacky Wednesday.)

But the greatest white rapper of them all in the 1960s was not an actor or senator. He was Napoleon XIV (real name: Jerry Samuels)  who recorded this sensitive take on behavioral-health issues called "They're Coming to Take Me Away, Ha-Haaa!" This track actually was a crude form of hip hop, just a guy reciting lyrics over a beat and an ominous siren. Why has Napoleon XIV not been sampled more?

Finally, I know that technically he doesn't qualify for this category, but for his 1967 song "Don't Blame the Children," I believe that Sammy Davis, Jr. should be considered at least an honorary  white rapper.