A version of this was published in The Santa Fe New Mexican
February 5, 2016 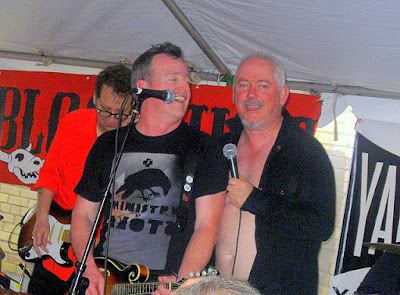 It’s been so long since The Waco Brothers released an album of new material I was beginning to wonder whether the standard-bearers of Bloodshot Records’ “insurgent country” were going the way of the Branch Davidians — without the spectacular finale.

After all, since 2005’s Freedom and Weep, the only albums the group has released are a live record (Waco Express: Live & Kickin’ at Schuba’s Tavern, Chicago) in 2008 and a collaboration with alternative country singer Paul Burch (The Great Chicago Fire) in 2012.

But now the good folks at Bloodshot have given us a double shot of Wacomania. In December came a limited-edition live album called Cabaret Showtime, and set for release later this month is Going Down in History, that long-awaited album of all-new material.

For the uninitiated, The Waco Brothers came to be in the early ’90s, forming in Chicago, where Jon Langford of The Mekons had settled. Most of his current bandmates — including fellow Brits Tracy Dear and Alan “Sprockets” Doughty plus Wisconsin native Dean Schlabowske (aka Deano Waco) — have been in the Waco Brothers since the beginning.

At first they were basically a Langford side project, gigging in Chicago and covering lots of classic country songs (“for free beer,” or so the legend goes).

Langford’s love for country music is sincere. As a Mekon, he helped facilitate the shotgun wedding of punk rock and country music with albums such as Fear and Whiskey and Honky Tonkin’, back in the 1980s.

With The Wacos, he rocked the country far harder than The Mekons ever did while somehow remaining truer to the source material. And then Langford, Schlabowske, and the others started writing all these great songs especially for The Waco Brothers. (Their original tunes are officially credited to the band, so it’s hard to determine who actually wrote what.) And when Chicago’s Bloodshot Records was born in 1994, The Wacos were a natural match. They rightfully remain the label’s flagship band. 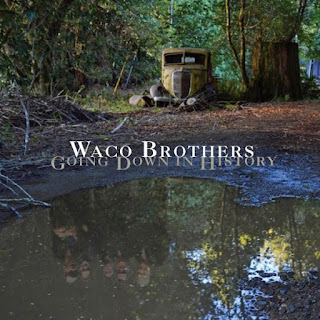 The first thing I noticed about Going Down in History is that the band is continuing the path of its last few studio albums, jettisoning many of its overt country touches. Steel guitarist Mark Durante has been gone for years now (and that’s a loss). And to be honest, unlike their earliest albums — To the Last Dead Cowboy and, especially, Cowboy in Flames, which whomped me over the head right off the bat, — it took a few listens for the new one to grow on me. But grow it did. The raw, muscular-but-melodic, roots-informed rock in the end is just hard to resist.

The opening cut, “DIYBYOB,” sung by Schlabowske, contains a clever twist on an old sea dog adage: “Sailors take warning, red eyes in the morning/You can’t kill us, we’re already dead.” There’s a vague reference to national politics, which Deano instantly backs away from (“Move along, there’s nothing here to see”), while the refrain seems to speak of a failed relationship (“DIYBYOB, there’s nothing left ’tween you and me”).

But by the last verse of the song, the singer proudly clings to the punk-rock ethos that still propels him: “On the day after the music died/Can’t take all the credit, but we tried/You can’t cut the power, you can’t turn out the lights/We’ll keep the party goin’ through the night.”

“We Know It” starts off with some foreboding, bluesy noodling but quickly turns into a hard-charging, almost paranoid rant by Langford: “We know it when we see it/We know it when it calls/We know it can’t be good for us/We know we want it all.”

One of the chief delights by Langford here is “Building Our Own Prison,” which takes a souped-up Bo Diddley beat and makes it more chaotic, while Langford sings about “big boxes” ringing the town, donating his shopping list to science, and nailing “my body to the temple door.”

The Wacos do two cover songs on Going Down in History. One is The Small Faces’ “All or Nothing,” which sounds as close to a soul ballad as you’re ever likely to hear from the band. (They dedicate this to Faces’ keyboard man Ian McLagan, a friend of the band, who died in 2014.)

And they end the album with a rocking version of Jon Dee Graham’s “The Orphan’s Song.” At the end of the song they playfully alter the refrain, turning “I will be your brother for the night” into “I’ll be your Waco Brother for tonight.” 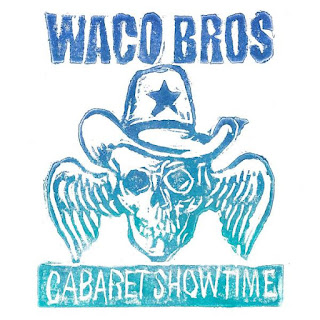 As for Cabaret Showtime, this is a lighter-hearted affair on which The Wacos romp through some of the great country tunes that inspired the group all those years ago: Buck Owens’ “Tiger by the Tail,” Johnny Cash’s “Folsom Prison Blues” and “Wanted Man” (which was actually written by Bob Dylan), and Gram Parsons’ “Ooh Las Vegas” are all here. There’s even a country version of bluesman Jimmy Reed’s “Baby What You Want Me to Do” (which is called “You Got Me Running” here).

My personal favorite on this album is a fairly obscure George Jones song, “Girl at the End of the Bar.” Langford practically spits the lyrics (“She had so many hard knocks/She don’t play the jukebox/She’s lived all those sad songs firsthand”) just before he plays probably the prettiest guitar solos I’ve ever heard him play.

But it’s not all hillbilly hijinks on Cabaret. There are not one but two Waco-ized T. Rex covers (“Debora” and a garagey “20th Century Boy”). And — believe it or not — The Waco Brothers play Pink Floyd! It’s an instrumental called “Interstellar Overdrive,” which appeared on Floyd’s 1967 debut The Piper at the Gates of Dawn.

So no, this album isn’t for country purists. But purists have never been The Wacos’ top demographic target.

Pre-order Going Down in History and buy Cabaret Showtime at www.bloodshotrecords.com. 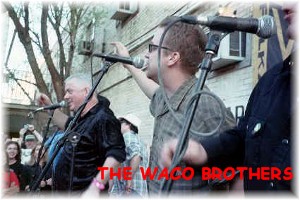 Here is a semi-unplugged version of a Wacos classic. (I've never seen Langford perform while sitting down before)

And here the lads celebrate "The Death of Country Music"