THROWBACK THURSDAY: The Strange and Shameful Saga of Sister Kate 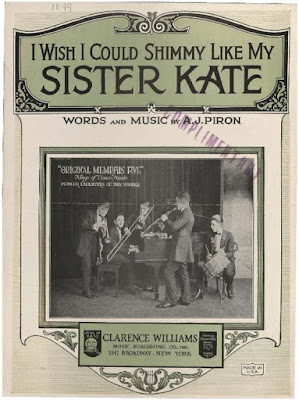 A dirty song, an alleged music biz ripoff in which one of America's most revered musicians was the victim. And possibly --- just possibly -- a mysterious link to a murder in a New Orleans whore house.

That's my kind of music!

I's the story of the little ditty called "I Wish I Could Shimmy Like My Sister Kate," an oft-recorded novelty tune that would become one of the biggest hits of the jazz age nearly 100 years ago.

The lyrics of the song that became successful are about a girl -- or sometimes a boy -- who goes to a dance with his or her sister Kate who amazes and delights everyone there by her prowess in dancing the Shimmy -- a controversial dance craze that was leading the youth astray right before the 1920s began to roar.

Oh, I wish I could I shimmy like my sister Kate;
She shimmies like a jelly on a plate.
My mama wanted to know last night,
What makes the boys think Kate's so nice.

Now all the boys in the neighborhood,
They know that she can shimmy and it's understood;
I know that I'm late, but I'll be up-to-date
When I shimmy like my sister Kate.

Here's a 1922 recording by Leona Williams


So where did Kate learn to shimmy?

Even though a pair of New Orleans musician and pubisher Armand Piron is credited with the song -- sometimes sharing the glory with musician Clarence Williams, Louis Armstrong long claimed he knew Kate before she even shimmied.

Laurence Bergreen, in his biography,  Louis Armstrong An Extravagant Life told Armstrong's story of "Sister Kate." Armstrong said that when Kid Ory hired him, he told the young coronet player he should  "Work up a number so we can feature you once in a while," So he did,even creating a little dance to go with it. Bergreen writes:

Bergreen describes the song as 'an unashamedly filthy thing" which was titled "Keep Off Katie's Head" or, sometimes "Take Your Finger Out of Katie's Ass" The lyrics Bergreen quotes in the book though don't seem all that dirty:

Kate Townsend, who ran a high-class cat house on Basin Street, was killed in 1883 during a drunken quarrel by her longtime "fancy man" Troisville Sykes. A jury found him not guilty.

As much as a bordello murder adds some dark, romantic appeal to the song, I'm skeptical. Townsend was killed about 35 years before Armstrong started performing "Katie's Head." There's not much that even hints at any killing or violence of any kind in the lyrics of either the dirty or clean version of the song.

Except perhaps the line, "It's a shame how you're lying on her head /I thought sure you would kill her dead ..."

Still, I think that's a stretch.


Getting back to Satchmo, Bergreen writes:

When Louis sang this to a packed house at Pete Lala's one, "Man, it was like a sporting event. All the guys crowded around an they like to carry me up on their shoulders." It wasn't just the song that got the crowd so excited, it was the little dance Louis did with it, his version of the Shimmy. which was just beginning to appear in cities around the country, scandalizing proper folks ...

"One night, as I did this number I saw this cat writing it all down on music paper. He was quick man , he could write as fast as I could play and sing. When I had finished he asked me if I'd sell the number to him. He mentioned twenty five dollars. When you're only making a couple of bucks a night that's a lot of money. But what really put the deal over was that I had just seen a hard-hitting steel gray overcoat that I really wanted for those cold nights. So I said `Okay' and he handed me some forms to sign and I signed them. He said he'd be back with the cash, but he never did come back."

The stranger was Clarence Williams, who Bergreen describes as "the first important black musician in New Orleans ..." Williams and Armand Piron, who started the first black-owned music publishing business in New Orleans, published Artmstrong's song in 1919.

"They changed the music slightly, gave it a faddish title -- "I Wish I Could Shimmy Like My Sister Kate -- cleaned up the lyrics," Bergreen said.

The song became a hit.

So yes, young Louis, according to the story, sold the rights to what's been called "The first jazz hit of the 1920s" for an overcoat. And he never even got paid for it.

But did Armstrong actually write it? In his 1987 book I Remember Jazz: Six Decades Among the Great Jazzmen, Al Rose recalls a 1939 interview with an ailing Piron, who, in so many words, suggested Armstrong take his finger out of Katie's ass.

Asked about Armstrong's claim about "Sister Kate,"  Piron said,  "that's not Louis' tune or mine or Pete's either. [Pete is New Oreans jazzman Peter Bocage, who was present at Rose's interview.] That tune is older than all of us. People always put different words to it. Some of them were too dirty to say in polite company."

Whoever wrote it, Sister Kate still shimmies among us. Enjoy a few versions of this classic song.

The Original Memphis Five had an early hit with this instrumental take.

WWII pin-up girl Betty Grable took a crack at this song -- including an introduction I'd never heard before.

The first version I ever heard, when I was in junior high, was by The Nitty Gritty Dirt Band on their 1967 debut album

The late David Bowie used to perform "Sister Kate" in the mid '70s as part of a medley with an old soul tune "Footstompin'" (Note the guitar riff he'd later use on "Fame.")

And just recently, this cool little band from Italy called Oh Lazarus recorded it for their album Good Times.