WACKY WEDNESDAY: He Was Speck-tacular 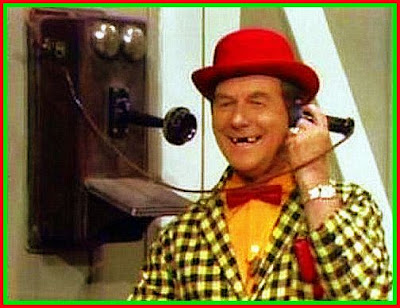 I'm a longtime Porter Wagnoner fan having discovered the Man from Missouri on his syndicated TV back in the '60s.

But as much as I loved Porter's music, the thing that originally drew me to the show when I was a kid was a bizarre looking dude known as Speck Rhodes,

He portrayed the ultimate country bumpkin, He dressed like a living ventriloquist dummy -- an ever-present bowler hat, often in a loud color, a checkered jacket and a bow tie. His top front teeth were blackened. I assume they were blackened.

Speck  was born born Gilbert Ray Rhodes in West Plains, Mo. (which also was Wagoner's home town) in 1915. On the Wagoner show, he  seemed like a throwback,something from the days of vaudeville -- and indeed he and his brothers were a part of that world, performing on the RKO circuit as The Log Cabin Mountaineers.

Wagoner hired Rhodes for his TV show in 1960. Sometimes you'd see him playing stand-up bass with the Wagon Master Band. But Speck would come out, tell a few corny jokes then do some funny songs, a few of which you'll see below.

Here's a tune -- I assume it's an early one since its in black and white -- called "I'm Going Back To Where I Come From."

After bantering with Porter for a minute or so, Speck sings a song called " If I Could Just Go Back."

This video seems to be a live concert performance. The song is "When Its Long Handle Time In Tennessee."

I call this next one "Speck-a-palooza." There are three songs here: Speck proves he's a rocker at heart with "Hound Dog" (yes that "Hound Dog"); "I'm a Plain Old Country Boy" and Little Jimmy Dickens' "Sleepin' at the Foot of Bed."