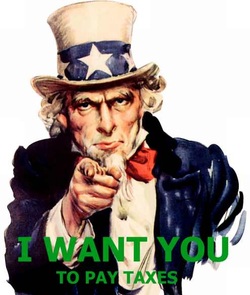 One hundred and three years ago today, the states of Delaware, Wyoming and my beloved New Mexico voted to ratify the 16th Amendment of the U.S. Constitution, the one that gives the federal government authority to impose a personal income tax on its citizens.

Delaware is recognized as the 36th state to ratify -- the one that put it it over the top. I don't know whether Delaware did it before us due to their earlier time zone or whether our state Senate got preoccupied introducing guests in the gallery or the House got detoured by some memorial honoring the city of Pie Town.

Whatever the reason, Delaware got the credit. Or blame if you really hate taxes.

Here are a few songs by American artists honoring the 16th Amendment.

Next up is The Man in Black with "After Taxes."

Johnny Paycheck sings about his friends at the Internal Revenue Service.

But here's a different kind of message about taxes. In 1942, as the U.S. was fighting World War II, the IRS commissioned Irving Berlin to write a little reminder that paying taxes is patriotic. Here in his song "I Paid My Income Tax Today," comedian Danny Kaye sings lyrics like:

See those bombers in the sky?
Rockefeller helped to build ’em, so did I
I paid my income tax today