TERRELL'S TUNE-UP: Are You Afraid to Pogo?

A version of this was published in The Santa Fe New Mexican
April 22, 2016 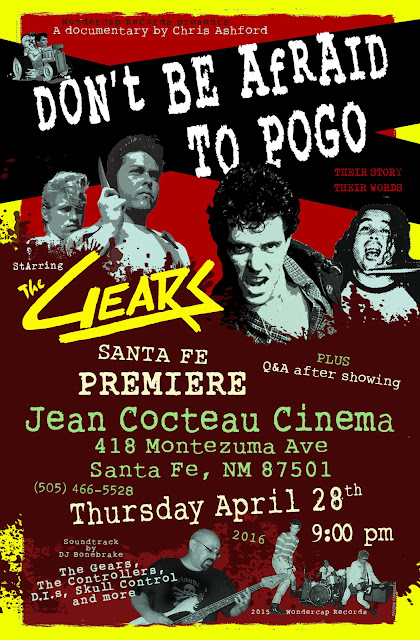 The northeast Los Angeles “punk surfabilly” band called The Gears got theirs with a fun new rock doc called Don’t Be Afraid to Pogo, which is playing next week at the Jean Cocteau Cinema.

I’ve never pretended to be an expert on the L.A. punk scene, though I’m a longtime fan of bands like X, The Germs, and Angry Samoans (even before founding member Gregg Turner moved to Santa Fe). I loved the movie The Decline of Western Civilization (1981) as well as Repo Man (1984), which had a soundtrack featuring Black Flag, The Circle Jerks, and The Plugz.

But I have to confess, until I recently saw Don’t Be Afraid to Pogo, I’d never heard of The Gears. But now I’m a fan.

Like any decent band documentary, this one, directed by Gears manager Chris Ashford, is crammed full of interviews with band members past and present, others from the L.A. punk world, live footage both ancient and recent, photos, and all sorts of Gear lore. Which Gear got kicked out of the band for breaking a beer bottle across a roadie’s face? Why is singer Axxel G. Reese obsessed with pirates? What was The Gears’ connection with early-’60s rocker Freddy “Boom Boom” Cannon, Chicano artist Richard Duardo, and Santa Fe photographer Ronn Spencer? You not only get to know the band, but the whole milieu from which the group sprang.

The origin of The Gears goes back to when Reese and drummer Dave Drive (real names Terry Davis and Dave Fernandez) went to elementary school together in the largely Hispanic Glassell Park neighborhood. They knocked around in various bands for years, finally coming back together as The Gears in the late ’70s.

Current Gears bassist Mike Manifold (real name Mike Villalobos), was just a kid when The Gears started out. But living near Dave Drive’s house, he was familiar with the group. He’d watch the musicians load and unload their equipment and often smell marijuana smoke wafting out of the house as he walked home from school. His grandmother, he said, warned him to “stay away from those kids.” 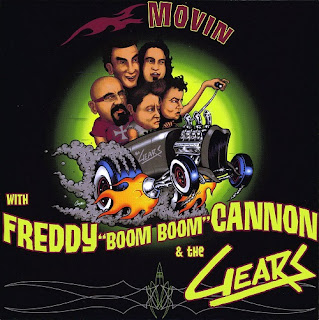 Apparently a secret nexus of L.A. punk rock was the Budget Rent-a-Car office in Glendale. That’s where Kidd Spike (Jeff Austin) and Brian “Redz” Anderson met before they joined The Gears. Marc Moreland of Wall of Voodoo and Johnny Stingray of The Controllers worked there, too. Spike originally played with The Controllers, but The Gears managed to steal him. Spike, who learned to play guitar from listening to a Ramones record, is credited for bringing the rockabilly influence to the band.

Miss Mercy of the infamous GTOs — a collective of groupies that Frank Zappa fashioned into an a cappella singing group — took The Gears under her wing, becoming known as their “fashion consultant.” She’d find seersucker suits, leopard-skin jackets, and cowboy boots for the band and do their hair, which in those days involved exaggerated rockabilly greaser styles. “They always smelled like Tres Flores [hair pomade],” the singer from Mad Society, another early L.A. punk group, says.

The documentary tells the stories behind some of The Gears’ songs. Their first single was “Let’s Go to the Beach.” Reese explains that living in northeast Los Angeles, the beach was “a trek for us. We weren’t really beach kids by any stretch of the imagination.” “Hard Rock” was written by original guitarist “Crazy Ruben” Urbina, inspired, he says, by the death of Elvis Presley. “Trudie Trudie” was an ode to a scenester and early Gears fan from South Bay. The real Trudie appears in the documentary. 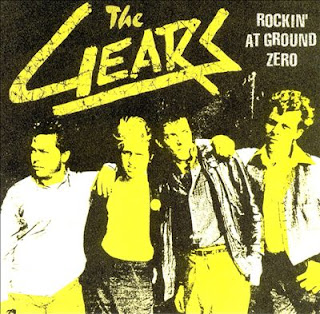 “Elks Lodge Riot” is about the notorious “St. Patrick’s Day Massacre,” which occurred on March 17, 1979, at a big punk show (with an all-star bill including X, The Go-Gos, The Plugz and others) in an actual Elks Lodge near MacArthur Park. That night, Los Angeles police in riot gear raided the joint right in the middle of The Plugz’s set. A bunch of kids got beat up, and the reason is still pretty hazy.

And naturally they talk about the song that became the title for this movie, “Don’t Be Afraid to Pogo.” Crazy Ruben explains that he was self-conscious about diving head-on into punk culture, so the song was basically written as a message to himself.

Of course, as a dance craze, the pogo was much tamer than the crazy moshing at punk shows that soon followed. And as the ’80s progressed, the L.A. punk scene grew a lot more aggressive. The violence and fury of the hardcore scene was off-putting to members of The Gears. “There was a transition in L.A. punk that I didn’t like,” Spike says. By that point, he was getting pretty burned out anyway, he says.

So after Spike split, The Gears broke up in the mid-’80s and hived off into various other groups. But they’ve regrouped at least a couple of times through the years. And judging from their more recent album, When Things Get Ugly (2014), as well as the live footage from the movie, they’re still in fine form.

So check out this flick, and if the spirit moves you, don’t be afraid to pogo.

Don’t Be Afraid to Pogo is showing on one night only, at 9 p.m. on Thursday, April 28. Director Chris Ashford and some members of the band will be on hand for the showing.

I’ll be doing a live interview with Axxel and Spike from The Gears this week on my radio show, Terrell’s Sound World. The show starts at 10 p.m. on KSFR, 101.1 FM.

Here's the promo for the doc

Let's Go to the Beach

Freddy Cannon teams up with The Gears for a crazed take on "Tallahassee Lassie."