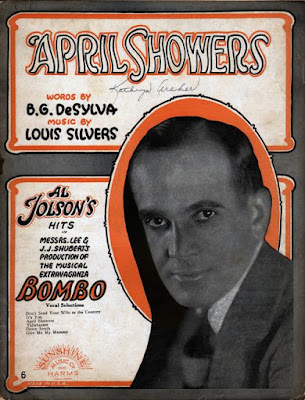 Walking out to the parking lot after work today I looked up to the sky and saw the clouds. But, being from New Mexico, I realized it probably wasn't really going to rain.

And then this song popped into my head:

Though April showers may come your way, they bring the flowers that bloom in May ...

It's one of those songs folks my age and older have just known all our lives. I probably first heard it on a Bugs Bunny cartoon.

But the song, written by written by Louis Silvers and lyricist B. G. De Sylva, goes back to a 1921 Broadway musical called Bombo, starring a young Al Jolson.

"April Showers" became one of Jolson's signature songs -- though it wasn't identified with him nearly as much as "My Mammy" or "Swanee."

I'm not exactly sure when Mel Torme shot this version with the Page Cavanaugh Trio. But it's pretty snazzy.

But, about 14 years after Jolson first sang this tune, there was another song that had "April Showers" in its title, "March Winds and April Showers," written by Walter G. Samuels, Leonard Whitcup and Teddy Powell.  Here's a 1935 recording by Abe Lyman & His California Orchestra, with vocals by crooner Louis Rapp.

And somehow, decades later, that song evolved into this, thanks to  ProleteR, a French guy who loves remixing and modernizing old jazz, R&B and soul tunes. (He does a great "Melancholy Baby")