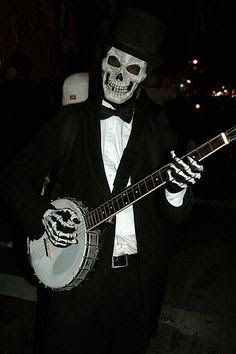 I'm in the mood for some musical bloodlust ... in the folk tradition.

Songs that make you proud to be an American.

Let's start out with "Wild Bill Jones" as performed by a gent named Frank Proffitt, a Tennessee banjo picker who is credited with popularizing another great murder ballad, "Tom Dooley."

"Delia's Gone" is normally associated with Johnny Cash. But the song goes back at least to 1900, when 14-year-old Delia Green was murdered by her 15-year-old boyfriend in Savannah, Georgia. This is a calypso version by Bahama-born Blake Alphonso Higgs, also known as "Bind Blake' (Not to be confused with the American Arthur "Blind" Blake.)

And this is one that I know best by The Everly Brothers and, later, Peter Case. But like the others here, "Down in the Willow Garden" goes back much further. One weird little "folk process" things about this song: In many versions, including the one below by Charlie Monroe, the singer says he had a bottle of burgandy wine. But in others, like The Everlys' it's "burglar's wine." Somehow that seems more evil and mysterious.


This next one goes back centuries to the British Isles. It's the tale of a psyhotic killer, a baby murder infact. This grim little tale sometimes is called "Lamkin" sometimes Lambkin' and numerous variations thereof. Sometimes the villain is a stone mason who was stiffed for payment by some nobel. Lankin takes revenge on helpless members of the rich guy's family, aided by a "false nurse." The most memorable lyrics; "We will pinch him, we will break him, we will stab him with a pin ..."
When I first heard back in the '70s, it was "Long Lankin" and was performed by the British folk rock band Steeleye Span. This is a 2004 performance by Steeleye.