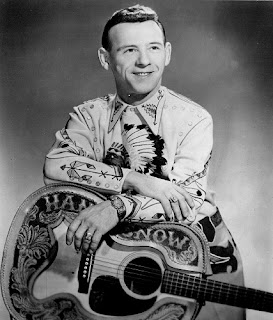 Monday, May 9 would have been the 102nd birthday of the greatest country singer to ever come down from the Great White North.

I''m talking of course about Nova Scotia-born clarence Eugene Snow, better known as Hank Snow, whose love for Jimmie Rodgers and early country music helped him escape a life of poverty and an abusive childhood home.

Snow by the mid 1930s established himself as a country radio star and recording artist in Canada, signing up with RCA Canada.

He started being noticed by American country fans. In 1945 he took the plunge and moved to Nashville and eventually joined the Grand Old Opry.

And it didn't take long before he became recognized as one of country music's great.

Snow died in 1999. But his music lives on, so let's enjoy some of Snow's classic tunes, starting with his first single, "The Prisoned Cowboy," released in Canada in 1936.

Here's a song that Elvis later recorded. (Early in Elvis' career he was managed by Snow and Col. Parker. The evil colonel would squeeze Snow out of that picture. Ain't show biz grand?)

This song, along with "I'm Movin' On," became Snow's signature songs.


Finally, here's the greatest song about squids in the history of country music. Snow didn't write "The Squid Jiggin' Ground" -- a Canadian named Arthur Scammell did back in the late '20s. But snow was no stranger to this world. He actually worked on fishing boats for several years in his youth.