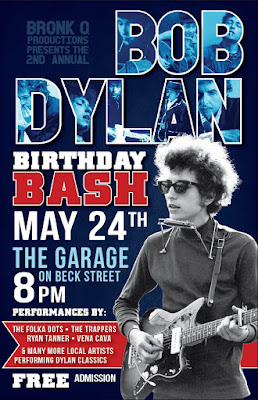 He's been singing, writing and recording songs for more than 50 years, And now Bob Dylan has turned 75, That happened just this week, on Tuesday, May 24.

So in honor of one of the most covered songwriters in modern history, here's a wide variety of artists singing songs of Bob.

While most of the musical acts below are not obscure by any means, these Dylan covers aren't that well known. (Except maybe one. But you'll have to read on.)

I actually didn't find any of the latter. If I ever do, you know I'll post them.

In 1974 Tina Turner changed "She Belongs to Me" into "He Belongs to Me" on her first solo album, Tina Turns the Country On. She also did another song on that album, "Tonight I'll Be Staying Here With You."

Buck Owens stumbled over the line about "ceremonies of the horsemen," but he sings it straight from the heart.

Dylan is a favorite of the Golden Throats -- Telly Savalas singing "I Shall Be Released," Eddie Albert blowing "Blowing in the Wind" and of course William Shatner's game-changing take on "Mr. Tambourine Man." But my favorite is "It Ain't Me Babe" as performed as a spoken word piece by Sebastian Cabot's (He was "Mr. French,' the butler in the '60s sitcom Family Affair.)

Sebastian starts off as if he's nursing the hangover of his life ("Go away from my window!") and ends up sounding like a third rate villain taunting some poor hostage. Enjoy.


Unlike the others here, this song actually was a minor hit of sorts -- at least I remember WKY in Oklahoma City playing it -- by a vocal group calling itself "The Wonder Who." But nobody wondered very long. Everyone figured out that it was The Four Seasons with Frankie Valli in hyper-drive falsetto. Many say Frankie did it as a joke. If so, it was a cruel joke ...