TERRELL'S TUNE-UP: Bastards of the Blues

A version of this was published in The Santa Fe New Mexican
July 22, 2016


Decades ago Muddy Waters proclaimed, “The blues had a baby and they named it rock ’n’ roll.” I wonder if Muddy knew that well into the 21st century, the bastard offspring of that unholy union would keep coming.

What follows are recent releases from blues-rock bands that could be classified as “punk blues,” though let’s not get too hung up on labels.

Unlike the blues rockers of the 1960s and ’70s, who worshipped at the altar of Chicago blues stars like Muddy, Howlin’ Wolf and Sonny Boy Williamson, these newer groups are more influenced by the primitive Mississippi Hill Country Fat Possum Records roster of the early to mid-’90s (R.L. Burnside, T-Model Ford, Paul “Wine” Jones).

In fact, a friend of mine who caught Lonesome Shack at the Mine Shaft Tavern told me they’re the closest thing to the late Junior Kimbrough he’s heard in years. 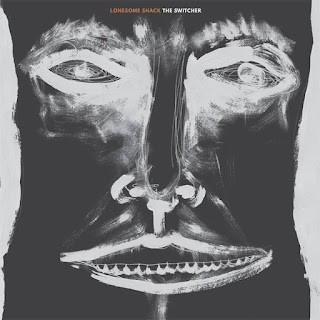 * The Switcher by Lonesome Shack. This trio is based in Seattle, but their roots are in New Mexico.

Singer/guitarist Ben Todd spent part of his youth in Silver City and Albuquerque. His mom still lives in Deming. In the early part of this century, he and his girlfriend moved to a trailer in a remote part of Catron County, near Alma, N.M. Todd built a little shed he dubbed “Lonesome Shack” (after a Memphis Minnie song), where he could practice guitar and write songs without driving his girlfriend nuts.

Todd wrote all the songs here except an old gospel shouter called “Safety Zone” (best known in recent years for its version by The Fairfield Four). With Todd’s guitar and vocals out front, Lonesome Shack can get rough and rowdy on songs like “Diamond Man,” “Mushin’ Dog,” and “Chemicals.” But they aren’t as hard-driving as many of their punk blues peers. Lonesome Shack is a little more subtle on slow burners like the spooky “Dirty Traveler” and the almost noirish “Blood.” 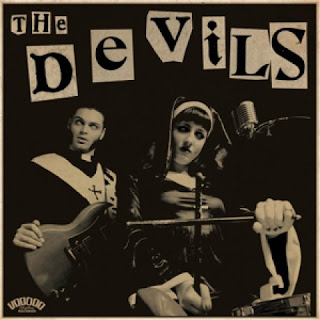 * Sin, You Sinners! by The Devils. This is an Italian duo — guitar man Gianni Vessella and singer/drummer Erica Toraldo — that plays a hopped-up, explosive, hellfire version of the blues that owes more to crazed punk rock than it does to Hound Dog Taylor. Naming themselves after a classic 1971 Ken Russell movie about a priest who is executed for witchcraft, The Devils perform dressed as a priest and a nun and play songs with titles like “Coitus Interruptus (From a Priest)” — check YouTube for the wild and wonderful video of this one — “Shaking Satan’s Balls,” “Hell’s Gate,” and “Azazel.” No wonder they caught the attention of Reverend Beat-Man of Voodoo Rhythm Records. I believe they attend the same church.

The Devils are relentless. One song is more thunderous than the last. Currently my favorites are “Magic Sam” (I’m assuming this is a tribute to the late Chicago bluesman, who died of a heart attack in 1969 at the age of thirty-two) and, even though it’s barely more than a minute long, “Puppy Nun,” a joyful little rager that opens the album. All in all, Sin, You Sinners! is a blasphemous blast. 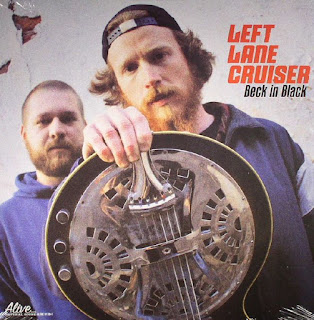 * Beck in Black by Left Lane Cruiser. LLC is a leading light of contemporary punk blues, with Freddy “Joe” Evans IV on slide guitar and vocals and, up to a couple of years ago, Brenn “Sausage Paw” Beck on drums. (When I saw them in Austin in 2014, they also had a bass player who made wild noises on a crazy homemade electric instrument fashioned from an old skateboard and a beer bottle.)

This is a strange odds-and-sods album of songs selected by Beck. It’s mostly remastered tracks from the band’s earlier albums, although six of the 14 songs have never been released before.

Among these are “The Pusher,” an anti-hard-drug anthem written by Hoyt Axton and made famous by Steppenwolf back in the late ’60s. Despite being a Steppenwolf fan, I didn’t immediately recognize it until well into the first verse. LLC plays it nice and bluesy. The lyrics are probably more relevant today than they were in 1968.

Another song here with a history is “Chevrolet,” written by Ed and Lonnie Young but based on a 1930 song called “Can I Do It for You?” by Memphis Minnie (her again!) and Kansas Joe and covered by all sorts of acts, from the Jim Kweskin Jug Band (with vocals by Maria Muldaur), Donovan (who renamed it “Hey Gyp [Dig the Slowness]” and took songwriting credits) and, best of all, The Animals. LLC attack the song with their usual crunch and pow, making it a highlight of this collection.

But I like LLC’s original songs, too. Some of my favorites include “Circus” (even though it doesn’t seem to have much to do with circuses), “Amy’s in the Kitchen” (which starts off with a Tom Waits-like percussion and vocals segment before the guitar soars in), and the drum-heavy instrumental “Sausage Paw.” 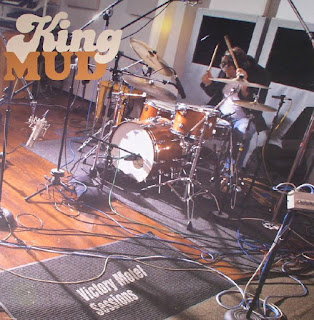 * Victory Motel Sessions by King Mud. This group is basically a side project for Left Lane Cruiser’s Freddy “Joe”
Evans and drummer Van Campbell, who plays with a band called Black Diamond Heavies (like LLC, on the Alive/Natural Sound label). Guitarist Parker Griggs from Radio Moscow (also on Alive/Natural Sound) joins in on a couple of songs, making King Mud something of a punk-blues supergroup.

My favorite Mud songs at the moment are “Smoked All My Bud” (the whole group sounds mean and desperate); the frantic “War Dancers”; and the hard-rocking closing track “Blood River.”

A sweet hymn from The Devils

All bow to King Mud

And here's some punk blues from 50 years ago!