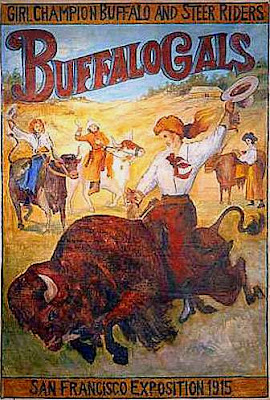 For years I've been fascinated by a song that I just always assumed was an Old West cowboy song, the song that might be sung out on the range, or by Miss Kitty's prettiest showgirls at the Long Branch Saloon.

I always assumed there was something going on beneath the lyrics about dancing with the girl with the hole in her stocking. Something spooky and mystical and sexy.

Recently while reading about "Buffalo Gals" on the Library of Congress Folklife Today blog, a commenter named Joe Ward described exactly what I thought the song was about:

It may have been a cleaned up account, but when I was a child in Texas I was told that it was based on an old cowboy legend that on moonlit nights on the prairie, sometimes the spirits of sleeping buffalo would emerge in the form of beautiful young girls and dance in the moonlight.

But there's good evidence that "Buffalo Gals" didn't start out as a cowboy song. And that article in Folklife Today, written by Stephanie Hall suggests that originally the Buffalo gals might have just been girls from Buffalo, N.Y.

... the origin of this song is often given as having been composed by the minstrel show performer John Hodges under his stage name “Cool White” in 1844. The lyrics are somewhat different, as shown by the title: “Lubly Fan Will You Cum Out To Night?” [sic] (Lubly Fan is Lovely Fanny). It is an early example of a song sung by a white man who performed in black face using a mock African American dialect. Just one year later another white group who performed in black face, The Ethiopian Serenaders, published sheet music for “Philadelphia Gals,” (1845) with similar lyrics and no attribution for a composer or lyricist. ... The Ethiopian Serenaders published another version, “Buffalo Gals” (presumably for Buffalo, New York), also unattributed. This is the first sheet music version of the song as it is most familiar to us today.

Hall, however, raises the possibility that the song could have existed long before it was published.

"Folk songs and minstrel show songs were often in oral circulation long before they appeared in published form, so first publication is not necessarily a reliable indication of a song’s age or the composer. It was not uncommon for the person who first transcribed a song to claim authorship, especially in the nineteenth century. ... Versions of the song may even have existed in oral tradition before “Lubly Fan” or “Buffalo Gals” appeared on minstrel stages.

Hall found what might be a version of the song in the guise of a fiddle song found in Virginia and West Virginia called "Round Town Gals" circa 1839. You can find a version of that HERE.

After the song was published in the mid 1840s, it began to travel around the country. Sometimes the title would be changed to match the locale in which it was being played. But "Buffalo Gals" began to stick.

"Who are those buffalo gals?" Hall wrote. "The bison is a symbol of America, especially the American west. As the song takes on new life, the `gals' may be women of the west, pioneers, cowgirls, or perhaps fancy women."

Or maybe even the spirits of wild animals who take human form to dance by the light of the moon.

Below are some worthy versions of "Buffalo Gals."

Woody Guthrie was not the first to record it, but he captured the spirit. His "Buffalo Gals is a drunken square dance.

Springsteen put some rock 'n' roll in it.

Former Santa Fe resident Eliza Gilkyson played with the lyrics and made it her own.


And, of course, Malcolm McLaren went crazy with it.