THROWBACK THURSDAY: Lookin' for that Bully of the Town 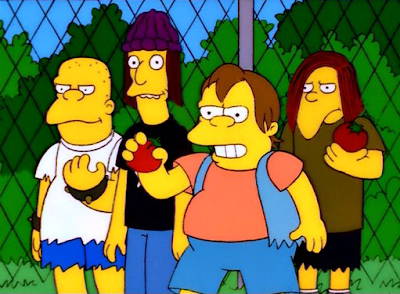 And thus a song that became known as "Bully of the Town" became popular with folk, blues and country musicians in the 20th Century.

Actually, though it sprang from the late 19th Century, where,  credited to Charles Trevathan, it was originally known as "The Bully Song."

Musician and music writer Elijah Ward writes of the song.

“The Bully Song” was a huge hit in 1895 for a Scots-Canadian singer named May Irwin, who performed it in a stage play called The Widow Jones — which is also notable because a brief scene which she kisses one of the other actors was filmed by Thomas Edison in 1897 and hence is one of the first movie love scenes. Irwin followed with other songs about African American badmen, sung in exaggerated dialect — though, unlike most white singers who specialized in that sort of material, she did not wear blackface make-up — and she was one of the few pop stars of the late 19th century to record some of her hits, including “The Bully Song.” 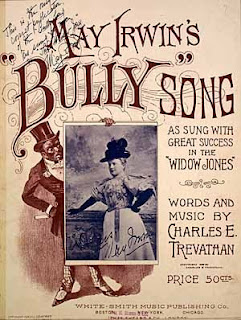 But Ward explains there is some evidence that the song predates Irwin's version. He quotes W.C. Handy saying he heard it in the early 1890s.

Songs of this sort could be tremendous hits sometimes. On the levee at St. Louis I had heard Looking for the Bully sung by the roustabouts, which later was adopted and nationally popularized by May Irwin. I had watched the joy-spreaders rarin’ to go when it was played by the band

Below is Irwin's recording of the song. Unlike some of the versions that followed, Irwin is explicit in her desire to give the bully a taste of his own medicine.

She also explicitly -- and repeatedly-- uses that well racist term that contemporary polite folk call "The N-Word." You'd think she was NWA or something.

So if you don't want to hear that word, don't press play! (Ward does a cleaned-up version of the song HERE)

Gid Tanner was rather vague about the circumstances of the song here.

Lead Belly's version is similar, though he gives some additional information -- the Bully "shot the woman down." I suspect Mr. Ledbetter wanted to kill the Bully, go to prison for it, then get released by writing a song sucking up to the governor of whatever state he was in.

Here's Jerry Reed singing with Buck Owens and Roy Clark on Hee Haw. Without the racist language, Jerry's version is closer in spirit to May Irwin's original. This bully is a definite asshole. There's a violent confrontation and the bully loses.