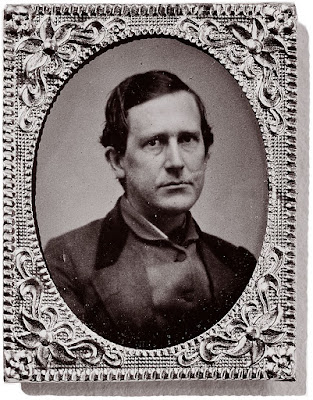 His contributions to American song are almost too many to mention.

If you don't know these songs ... well, just keep reading,

Quoting myself here from  a 2004 Tune-up reviewing a disappointing Foster tribute album, fortified by a couple of other sources:

Though many of Foster’s best-known songs deal with the antebellum South, Foster was born near Pittsburgh, Pa. In 1826.

He is recognized as America’s first professional songwriter. But despite writing some songs still being sung 150 years later, his final days were spent in poverty, alcoholism and despair. At the age of 37 he committed suicide by slashing his own throat.

So that would make him the Kurt Cobain of his era. But before that, he was Elvis Presley.

Elvis, Jerry Lee Lewis and those who loved them were drawn to the wild and mysterious music called rhythm & blues and mutated it in a new style called rock ‘n’ roll. Likewise, many white musicians in Foster’s era were drawn to the African-American music of their era, turning it into blackface minstrel music. [the tribute album] Beautiful Dreamer’s liner notes describes this music as “the rowdy, racist and first uniquely American form of popular entertainment.”

Several music historians have noted the sociological similarities between rock and minstrelsy.

Writer/historian Ken Emerson noted in a PBS documentary on Foster,  "... it goes all the way back to blackface and minstrelsy before the Civil War. And so in a way rock and roll led me to a long, tortuous path to Stephen Foster because that's where really this interplay and intermix of black and white culture that so defines American music to this day really began."

... Foster as a youth ate up the minstrel songs. While his songs were grounded in European styles, the minstrel element is what made Foster’s music unique and powerful.

Despite his minstrel-show roots and demeaning racial slurs in some of the songs, Foster had the respect of black abolition leader Frederick Douglass. Said Fred:

"Considering the use that has been made of them, that we have allies in the Ethiopian songs... `Old Kentucky Home, and `Uncle Ned,' can make the heart sad as well as merry, and can call forth a tear as well as a smile. They awaken the sympathies for the slave, in which anti-slavery principles take root and flourish."

And later, W.C. Handy, the “Father of the Blues,” would write, “The well of sorrow from which Negro music is drawn is also a well of mystery....I suspect that Stephen Foster owed something to this well, this mystery, this sorrow.”

Perhaps Roger Miller said it best in this long out-of-print song. "I think Stephen ws ahead of his time, that's all I've got to say."

And in their song "Wildebeest,” The Handsome Family sang of Foster's lonesome death in a flop-house on the Bowery. (“He smashed his head on the sink in the bitter fever of gin/A wildebeest gone crazy with thirst pulled down as he tried to drink”).

"And the oceans they feed the sky and the sky feeds the earth
And Stephen Foster’s beautiful ghost lay down to feed a song
To feed ten thousand songs echoing cross the wild plains ..."

And finally, The Squirrel Nut Zippers' wonderful tribute "Ghost of Stephen Foster." (Thanks John W. on Google Plus!)


And here's a Spotify list with Foster songs performed by some of my favorite artists, plus a couple of songs about the songwriter.