THROWBACK THURSDAY: This Train is Bound for Glory 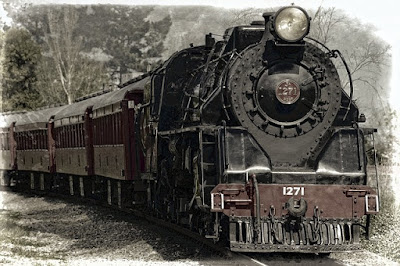 When President Obama gave his farewell speech last week, I was impressed by the fact that the song that played onstage was one of the most powerful and inspirational Bruce Springsteen songs ever written: "The Land of Hope and Dreams."

Even though it was just a recording, it hit me far harder than Obama's speech.

What gives the song its power how it draws from an old American spiritual. Well not that old. It had had to come after the coming of the railroad. The entire second part of the song is a re-write of the song "This Train."

It's generally agreed that the first recorded version was made in 1922 under the title of "Dis Train" by the Florida Normal And Industrial Institute Quartette.

Sister Roseta Tharpe had something of a hit with "This Train in the 1930s. But it the '50s, she recorded it with an electric guitar. Here's a live version from 1964 with blues pianist Otis Spann. (Unfortunately, she's not playing guitar.)

It's one of those songs that found devotees among white hillbillies as well as Black gospel singers. Here are the Delmore Brothers:

The train pulled into Jamaica where Bunny Wailer got on board. This was the closing song on Bunny's Blackheart Man, (still the greatest reggae album ever recorded.)

Jazz priestess Alice Coltrane took the train into the cosmos. To the moon, Alice!

But getting back to Springsteen ...

The original song seems to be about who is excluded from the Gospel Train.  Depending on who's singing it, this train don't carry no gamblers or midnight ramblers or liars or crap-shooters or whiskey drinkers. Even Bunny Wailer's train -- while surely having at least one car reserved for ganja smokers -- "only carries the children of Jah."

But Springsteen turns it around and lifts these severe restrictions. The train  in his song is for the rest of us:

This is a message we all may need to hear in the not so distant future. We're all in this together.