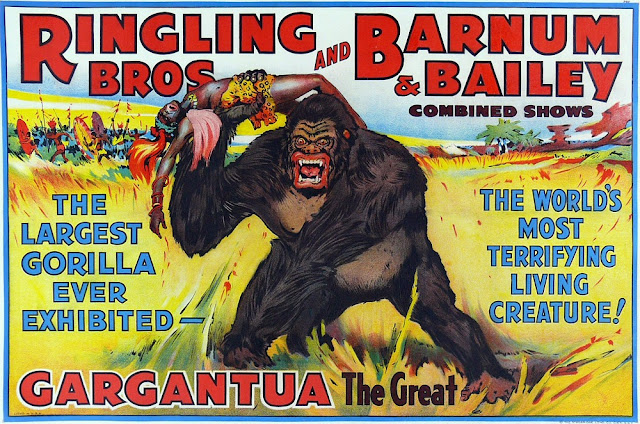 It's been about 20 years since I've been to a circus, so I can't really say I'm a huge aficionado.

Still, I felt ad last week when I read that The Ringling Brothers and Barnum & Bailey Circus was calling it quits. The final show will be in May.

Now I don't want to get into any arguments with animal-rights advocates. You guys won this one. Go preach on another soap box. Shoo!

I have fond memories of the circus. On the night when President Kennedy gave his televised speech about the Cuban missile crisis, Oct. 22, 1962, my grandmother was very upset and to a lesser extenr so was my mom. Pending Doomsday does that to people. I was only 9 years old and wasn't sure what was going on. But the family had tickets to the circus -- probably Ringling Brothers -- and dammit, we were going! So we did. And somehow, watching the spectacular that night I had a feeling that things were going to be OK.

I love circus posters, surreal circus imagery. Yes I love clowns. I love women in skimpy sequined dresses flying through the air with the greatest of ease. even though the circus showed a world of colorful wonderment, there always seemed to be an undercurrent of sadness surrounding the circus -- clowns who secretly wept, acrobats who might be hiding secrets, ringmasters running a circus of crime ...

So here's a musical tribute to a strange and seedy American art form (though the circus didn't originate in these United States and a high number of performers are from other countries.)

Here's a goofy jug-band circus by Jim Kweskin's and crew

And I would have loved to have seen the circus Tom Waits talks about here,