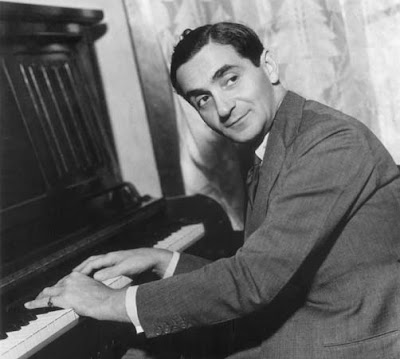 One hundred and twenty nine years ago today one of America's greatest songwriters was born.

But Israel Isidore Baline didn't stay in Russia long.  When he was five, his family immigrated to the U.S. to escape Russian persecution of Jews.

He didn't stay Israel Isidore Baline for long either, He rose to fame under the name Irving Berlin.

Here are some of his best known tunes done by a variety of singers. Happy birthday, Irving. We're all richer for the music you left us.

Here's a prohibition-era tune about a little island in the Caribbean that became a playground for Americans. It's sung by crooner Billy Murray in 1920,

You say you mainly like songs about sex and Satan? Well, Irving wrote at least one of those. Here's one sung by Harriet Hilliard, who later would be known as Harriet Nelson -- yes, Ozzie's wife and Ricky's mom. This song is from the 1936 movie Follow the Fleet.

Al Jolson sang this Irving hit in The Jazz Singer (1927).

And this Irving song is the best cover Leonard Cohen ever did.