THROWBACK THURSDAY: Revenge of the Scopitones 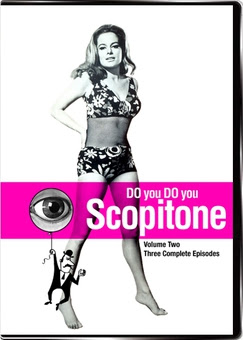 It's been more than a year since this blog explored the Sexsational World of Scopitones.

As the Wolf Brand Chile ads used to say, "Friends, that's too long."

As I said last year, Scopitone was a company that in the early to mid '60s, filmed hundreds of music clips featuring pop stars -- and many who weren't quite up to star status -- singing their songs, usually with busty bikin-clad dancers doing the frug and Watusi behind them.

Those were the days!

And all these film clips were played on a coin-operated machine, manufactured in France, called the Scopitone 450. It basically was a jukebox hooked up to a 26-inch TV set that played 16mm film clips.

You can learn more about the machines HERE and see some crazy examples of Scopitone videos below.

When I saw that a pretty blonde named January Jones was the star of several Scopitone films, I thought how would that be possible? The actor who played Betty Draper in Mad Men wasn't  even born then. But this January Jones is a Mad Men-era singer who knew how to stuff a wild bikini. Here she is singing "Up the Lazy River."

Here are April Stevens & Nino Tempo, who probably are best known for their mid-'60s hit cover version of the song "Deep Purple." But here they do "Land of a Thousand Dances." This cover is so lame would make Wilson want to picket and turn Cannibal of the Headhunters into a vegetarian. But was anyone listening to the music?

Here's Gale Garnett, who had  hit in the '60s witha song called "We'll Sing in the Sunshine." How ya like these taters?

Sonny King croons a tasteful "I Cried for You."

Finally, here's the queen of Scopitone, the incomparable Joi Lansing. 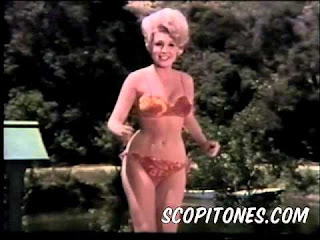