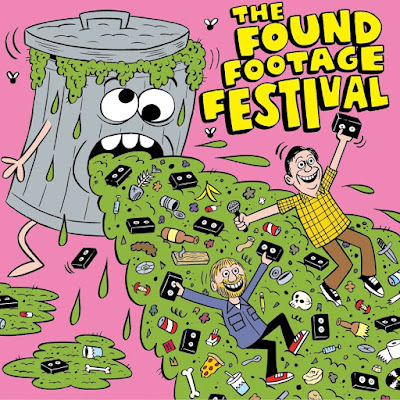 The Found Footage Festival, the brainchild of Joe Pickett and Nick Prueher, collects old VHS tapes that, according to website "were found at garage sales and thrift stores and in warehouses and dumpsters across the country."

Pickett and Prueher collect these and sell DVD compilations -- Volume 8 is about to be released. They also do live tours in which they play the best of these VHS treasures.

If you ever laughed at the Dave's Video Collection segments on the old David Letterman show, you'll probably love the Found Footage Festival. Prueher worked for five years as a researcher for Letterman and last year, and after Letterman retired, some of his staffers bestowed all the old tapes from Dave's Video Collection upon Pickett and Prueher "to be the stewards of this archive of weird videos. Rest assured, we’ll give it a good home."

Pickett and Prueher also are notorious pranksters. They recently were in the news for posing as a "strongman duo" -- Chop & Steele-- and tricking a Wisconsin morning TV show into having them on to show their amazingly mundane feats of strength. Last month the company that owns the TV station actually sued the two for copyright infringement, fraud and conspiracy,

Some people have no sense of humor.

Hopefully you won't sue after watching these music videos from The Found Footage Festival website.

Let's start with singer/songwriter Nicki Rose. Mama, he's one of a kind. The songs called "Personality Crisis," but I don't think The New York Dolls done it this way,

This'll get your Irish up. As Frank says "In the lit of Irish laughter you can hear the angles sing ..."

This is from a tape called Attracting Today’s Woman.

Harvey Sid Fisher has written songs about all 12 of the signs of the zodiac. This is a sampling. You can find more from Harvey Sid HERE