A version of this was published in The Santa Fe New Mexican
July 14, 2017 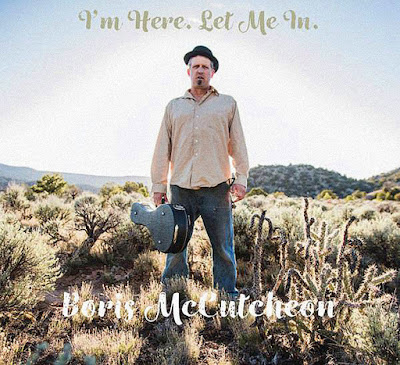 Singer-songwriter Boris McCutcheon is one of the original members of the local legion of superheroes who make up the Frogville Records stable. He was born in Massachusetts, but he’s lasted many winters in Northern New Mexico. In fact, he’s the only musician I know who’s ever been a mayordomo of an acequia.

But the important thing is that McCutcheon just keeps growing as a songwriter. His new album — I’m Here. Let Me In. — is his first since 2013’s Might Crash, and there’s not a dud on this record. It’s my favorite since 2005’s Cactusman Versus the Blue Demon. Most of McCutcheon’s albums in recent years have been credited to Boris & The Salt Licks. But this one, McCutcheon says, is a solo project, even though The Salt Licks appear on a couple of live songs and individual Salt Licks play on other songs, as do various Santa Fe stalwarts.

Among the best tracks are the upbeat “It’s Her Turn Now,” featuring the fabulous Salt Licks (guitarist Brett Davis, bassist Susan Hyde Holmes, Kevin Zoernig on keyboards, and Paul Groetzinger on drums). And this is followed by a pretty country song called “A Week Before the Fourth of July.” I think I was hooked in the first verse, when McCutcheon sings of eating tacos on the open road.

Another standout is the bluesy “Lazy With You,” in which Boris praises the virtues of sloth. A strong harmonica by Greg Williams and banjo by Alex McMahon give the song a Tom Waits feel. Meanwhile, the slow dirge-like “Poor Tired Hands” is a stark portrait of a guy who might benefit from a little laziness.

In a slow hillbilly waltz called “Godzilla vs. King Kong,” McCutcheon sings of domestic strife. As you might assume by the title, the lyrics are full of humor, but it’s bittersweet humor. With the deceptively pretty melody, you can’t help but feel for the unhappy couple. One verse goes, “Oh how did I wind up with a warrior princess?/She knows how to fight and kick my ass/There’s a storm in her eyes and she don’t know what she wants/She’s askin’ questions and getting’ no response.”

Keep listening to this album and you could end up with a storm in your ears.

Boris McCutcheon’s CD release party for I’m Here. Let Me In. is 8 p.m. Friday, July 14, at Meow Wolf, 1352 Rufina St. Tickets are $12 at the door ($10 in advance from www.meowwolf.com). The opening act is none other than Tony Gilkyson, a former local yokel who went on to play in such groups as X, Lone Justice, and Chuck E. Weiss’ God Damn Liars. 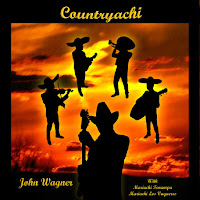 * Countryachi by John Wagner. Wagner is not only known as a country singer and songwriter, but he has also owned and operated an Albuquerque recording studio for many years. As the title implies, the songs on this album are country songs, sung by Wagner, with added mariachi horns and strings. A couple of groups — Mariachi Tenampa (an Albuquerque group that has recorded at least one album of their own at Wagner’s studio) and Mariachi Los Vaqueros — lend their talents to the project.

The idea isn’t completely new. After all, back in the early ’60s, one of Johnny Cash’s biggest hits, “Ring of Fire,” featured mariachi horns. Basically, the horns and strings, when added tastefully, provide a tangy embellishment on a good three-chord song.

The songs on this album include two early classics by Belen-based country singer Mose McCormack, a long-time Wagner crony. If New Mexico had a songwriter hall of fame, McCormack’s “Beans and Make Believe” (the title song of Moses’ 1976 debut album) and “New Mexico Blues” would both deserve a prominent place there. Wagner also includes a couple of mariachi’d-up songs by the late great Lewie Wickham, who was half of an Albuquerque duet with his recently deceased brother Hank Wickham (“Border Town Blues” and “Yesterday Took Wings”), along with several originals, including “He’s Sorry” (which contains a Kristofferson-worthy first line: “He said he was sorry this morning for his sorry excuses last night”) and my favorite, “It’s Not Right,” a sad (like-to-be) cheatin’ song. 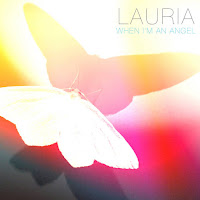 * When I’m an Angel by Lauria. It was 20 years ago when long, tall Laurianne Fiorentino, then fairly new to Santa Fe, released her first album, The Match, a set of 15 songs recorded live at the Santuario de Guadalupe. Two decades and several albums later, Fiorentino — now recording under the name of Lauria — still possesses her rich, sultry alto and songwriting chops, as this new record shows.

Lauria is at her best on bluesy, jazzy songs like the opening track, “Homeland,” which features a cool mandolin by Tristan Scroggins as well as Asher Barreras on bass; “Please Don’t,” with trumpet by JQ Whitcomb; and “Simple as the Sun,” a song that originally appeared on The Match. The melody is similar to a song I used to sing back in my Methodist Youth Fellowship days: “They’ll Know We Are Christians by Our Love.”

Also worthy is “All Night Rain,” an aching seven-minute country song that doesn’t actually have a steel guitar in it, though it’s easy to imagine one. And defying genre pigeonholing is the song “Drop,” a spoken-word piece in which Lauria, reciting lines like “I’m a melted drop of matter, a tear that never fell/When darkness comes to get me, you can find me in the well,” is backed only by drummer Joel Fadness, some uncredited voice, and her own harmonica honking. 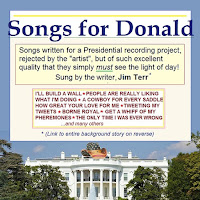 * Songs for Donald by Jim Terr. Failing parodist songwriter from Las Vegas, N.M. attacks the president of the United States of America — who won the election in a landslide — with unfunny, unfair, unpatriotic songs. #sad

I’m trying to help you here, Jim. If you could get Trump to attack you on Twitter, that would boost your GoFundMe project for this album (www.gofundme.com/DonnieTrunkCD) and sell a jillion copies.

Here's a longtime favorite from Lauria

And here's a new one from Jim Terr