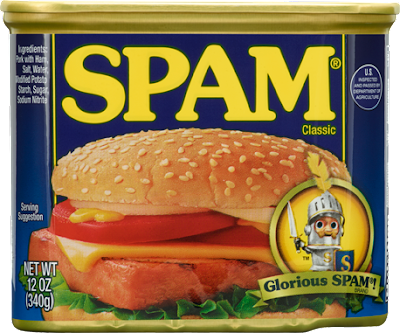 From the HealthCentral Daily Dose newsletter:

One of the more popular—and ridiculed—foods of the 20th century makes its debut when George A. Hormel & Company launches a new product it calls SPAM luncheon meat.  It’s mainly pork shoulder, a part of the pig that generally was thrown away because it was too fatty for ham, but not fatty enough for bacon.  At, first, the company simply had called it Hormel Spiced Meat, but switches to SPAM as a result of  a contest to come up with another name (The winner was awarded $100.).

Why SPAM?  One company spokesman said it’s meant to be short for “Shoulder pork and ham.”  A later story contended that it stands for “Spiced meat and ham.”  It would later be given   more unflattering names, such as “Something posing as meat.”

At 10 cents a can, though, it’s a big hit.  Within a year, one out of every five American families—with the worst of the Great Depression still fresh in their memories–make SPAM a part of their diets.  It really took  off in World War II because it could  easily be shipped overseas and stored.  SPAM became a staple of the American GIs diet, served meal after meal.  Overall, Hormel sent 100 million pounds of SPAM overseas during the war.

That's from the 1989 compilation Monty Python Sings. But it wasn't the first time Monty Python sung the praises of Spam' Here's a sketch from 1970.

Yes, Weird Al had an opinion or two about "Spiced Meat and Ham."

A rapper called Milk Dee in 1994 teamed up with Ad Roc from The Beastie Boys for this song called "Spam," which dropped this wisdom:

Spam! Ain't the move it's imitation ham!
Ham is pork and the pork is foul
Cut it like a pig and that ain't my style
Two MC's you know we're versatile