A version of this was published in The Santa Fe New Mexican
Aug. 4, 2017 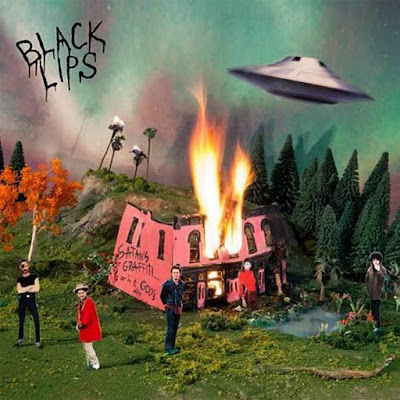 Young, dumb and snotty is nothing to be ashamed of in the punk rock racket. There’s a lot you can do with it. And The Black Lips play that card better than most – though they’ve been around long enough that the “young” part of that equation doesn’t quite fit as it used to.

But on their new album – their eighth! -- Satan’s Graffiti or God’s Art?, the Lips show that young, dumb and snotty is just a part of the band’s weird charm. Produced by Sean Ono Lennon, Satan’s Graffiti is a crazed pogo-stick hop through the cosmos. I’ve liked just about all Black Lips albums, but to these ears, this is their best since their 2007 live-in-Tijuana record, Los Valientes del Mundo Nuevo.

The album starts on a deceptive note, a strange, disturbingly mellow little instrumental called “Overture: Sunday Mourning,” featuring a sweet, sleazy sax by new Lips member Zumi Rosow. But that quickly fades to make way for a galloping rocker called “Occidental Front.” When singer Cole Alexander come on with the first verse, the melody sounds vaguely familiar, Is it Dock Boggs’ rasty old “Country Blues”? or is it that mean-eyed murder ballad “Wild Bill Jones,” turbo-charged with electric guitars? Listen close and you’ll hear Yoko Ono her bad self screaming in the background.

Virtually every track is a new adventure.  “Can’t Hold On,” is a decent hard rocker, though the last minute or so slows down, becoming a New Orleans jazz funeral dirge. “Squatting in Heaven” begins with a bouncy rhythm and repeating guitar line – or is that Rosow’s sax? -- that could be the sonic equivalent of an insect sting before settling in as riff-heavy blues-rock rumble. “Rebel Intuition” is mutated rockabilly, “Lucid Nightmare” is tribal psychedelic punk while “In My Mind There Is a Dream” could be Portishead re-imagined as garage rock.

And there is even a cover of an early Beatles song, “It Won’t Be Long,” which evokes visions of The Black Lips performing at some Hamburg dive bar with toilet seats around their necks for drunken sailors and off-duty strippers.

By far, the most startling tune on Satan’s Graffiti is a pretty little love song called “Crystal Night.” There is no mention of Nazis or religious persecution, but it couldn’t be clearer that this is about Kristallnacht, 'the night of broken glass," (Nov. 9-10, 1938) in which storm troopers and German civilians attacked Jewish homes and businesses. The Lips sing, “Where do they take you? / Where have you gone? … We never said goodbye / Now you’re sent to die / On crystal night …”

Some reviewers have criticized The Black Lips for their everything-but-the-kitchen-sink craziness displayed on this album, the jarring shifts in styles and atmospheres from song to song. But I find it refreshing. In the end, -- Satan’s Graffiti or God’s Art? finds coherence in its incoherence, hitting all kinds of targets with its scattergun approach.

Santa Fe Traditional Music Festival Returns: First of all, I think some disclosure is in order. This 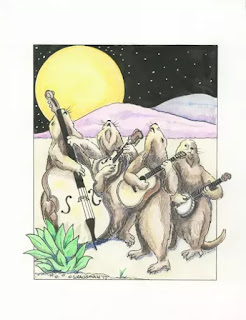 is journalism and they make us have ethics and stuff. So here is my personal connection to this festival:

Back in 1985 (or maybe it was 1986?), when this event was known as the Santa Fe Fiddle and Banjo Contest, some buddies and me decided to form a bluegrass band in the parking lot on the day of the festival. (I think it was just one day back then.)

Calling ourselves “Smilin’ Ted and The Bluegrass Bird Beings,” we rehearsed two songs – bluegrass versions of Johnny Horton’s “North to Alaska” and my own “Cook Yer Enchiladas.”

And, much to my surprise – and to the chagrin of some serious bluegrass artistes who had entered – we won first prize in the Professional Bluegrass Band Division! Not including myself, there were some seriously talented instrumentalists in the Bird Being lineup. But I honestly think what won us the trophy was my daughter, who was four or five at the time, who danced as our “go-go girl.”

But that’s neither here nor there. The news is that the Santa Fe Traditional Music Festival is back in the Santa Fe area again, August 25, 26 and 27 at Camp Stoney, 7855 Old Santa Fe Trail.
Actually, it’s sort of complicated. Last year Southwest Pickers, the non-profit group that’s run the show for years moved the festival up to Red River, (where their Southwest Pickers Bluegrass and Old Time Music Festival will take place Sept. 14-17).

The August festival at Camp Stoney is sponsored by a new group the Santa Fe Friends of Traditional Music and Outside In Productions – the same folks who bring us Santa Fe Bandstand every summer.

Whoever is in charge, the line-up looks fantastic. There will be a reunion of Elliott’s Ramblers, led by former New Mexican Elliott Rogers. Also appearing are some of the state’s finest old-timey, bluegrass and other traditional bands: Bayou Seco, Higher Ground, Lone Pinon, The Adobe Brothers, The Fast Peso String Band, Round Mountain, Mariachi Buenaventura and others.

Rumors of a Smilin’ Ted reunion however, are nothing but irresponsible speculation.

Tickets are $45 for all three days, though you also can buy tickets for single days. For the complete schedule and ticket information see check the website..


Here are some Black Lips videos: