THROWBACK THURSDAY: Do the Chairs in Your Parlor Seem Empty and Bare? 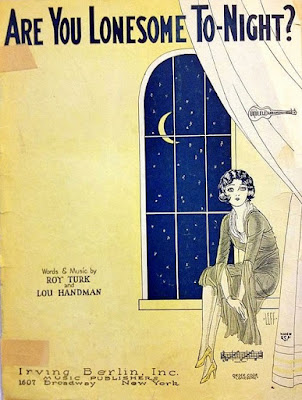 OK, I realize that just a week ago Throwback Thursday featured a bunch of my favorite Elvis Presley songs to mark the 40th anniversary of his death.

But this week we're taking a slightly deeper dive into another Elvis song, "Are You Lonesome Tonight."

Basically this is a song about a guy who misses his woman so much he's fantasizing that she's so miserable without him, she'll gladly take him back on the strength of a pretty melody.

And he may be projecting a little mental instability on her:

Do the chairs in your parlor seem empty and bare?
Do you gaze at your doorstep and picture me there?

As I sometimes do with songs I love, a wrote another verse to "Are You Lonesome Tonight" for my own amusement, building on that theme of insanity:

Do the shadows in your hall seem to whisper my name?
Do you pound on the walls seeking someone to blame?

Fortunately for you, gentle readers, I've never recorded that, though I did perform an a Capella version last week at Whoo's Donuts.

Be that as it may, "Are You Lonesome Tonight," unlike many of Elvis' hits of that era, was already decades old when he recorded it.

Turk (1892-1934) also wrote the lyrics to "Walkin' My Baby Back Home," (recorded by Nat King Cole, Louis Armstrong, Ella Fitzgerald and a jillion others) as well as the jazz standard "Mean to Me," (Billie Holiday, Sarah Vaughan) and Bing Crosby's "Where the Blue of the Night Meets the Gold of the Day."

By 1927 several artists of the day had recorded "Are You Lonesome Tonight." You'll notice in the early version, the song that we know, as sung by Elvis, is just the chorus of the song. The verses (the first one begins "Tonight I'm downheated / For though we have parted /I'll love you and I always will") have been forgotten through the years.

Here's the first recording of the song by crooner Charles Hart:

Here's a female singer, Vaughn De Leath, with another 1927 version.

I never realized until researching this that The Carter Family did a version in 1936 with a different melody.

Al Jolson recorded first version I could find to include the "world is a stage" spoken bridge. This is from 1950, just a decade before Elvis recorded it. (Despite the photo in the video, I don't believe Jolie did this one in blackface.)

Let's fast forward through a few decades. This is from the '90s but I bet Tiny Tim loved this song even before Elvis did. (Song doesn't start until after the 4 minute mark.)