WACKY WEDNESDAY: The Dick Nixons Are The Ones 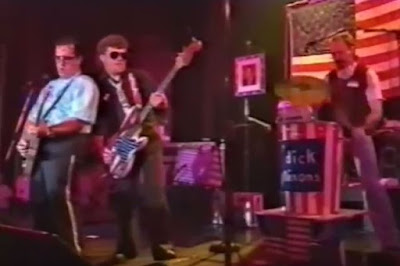 On this day in 1974, President Richard M. Nixon left the White House in the face of near certain impeachment.

But by the late '80s, a merry band of rock 'n' rollers from Donaldsonville, Louisiana had begun a noble, if tongue-in-cheek, attempt to rehabilitate Nixon's image. Led by a firefighter named Kirk Paul Landry, aka "Kirk the Jerk Springstone," The Dick Nixons The Dick Nixons sang songs glorifying the 37th president.

The group in 1992 released an album called Paint the White House Black, which was produced by none other than Memphis titan Jim Dickinson. It was on Triple X Records (home of the Angry Samoans!)

Unfortunately The Dick Nixons failed to get their hero re-elected president in 1988 or 1992. But they had fun trying.

There is not much information about The Dick Nixons online and only a scattering of YouTube videos, some of which are below.

But Landry, who died in 2009 at the age of 51, was an interesting character. Besides his work in The Dick Nixons, he was a "founding moron" responsible for an event called The Shemp Festival in Donaldsonville in the 1980s, which, according to a local press account, "reaped national attention with the largest pie fight in the southern Unites States." Sadly, Landry's career suffered a bizarre Nixonian twist. He rose to the rank as Donaldsonville's fire chief in 1992 and served in that position until 2004 when he was arrested for falsifying records. He was convicted in 2007, two years before his death.

Prosecutors said he altered fire reports to the insurance association to get a lower and better fire insurance rating for Donaldsonville. He "doubled his manpower on the fire reports he changed and added firetrucks that were not at the scene of the fires," prosecutors said. Landry’s lawyers argued that he "had no intent to defraud anybody" and that he only followed the advice of a Fire Department rating consultant hired by the city of to help get a lower and better fire rating.

He was sentenced to a year in prison but the judge suspended the sentence. Landry appealed the conviction, but a Louisiana appeals court affirmed the verdict and sentence about three months before Landry died,

Here are some songs by The Dick Nixons to commemorate this historical day.


This one's the very first Dick Nixons song I ever heard.


And here's the first part of a 1988 Dick Nixons television interview.

And here's a whole concert by the Dick Nixons on SoundCloud


If you like this, check out this Wacky Wednesday from two years ago featuring songs about Watergate.

(Hat tip to fellow Dick Nixons fan Ira Brooker and his A Talent for Idleness blog.)
at August 09, 2017