A version of this was published in The Santa Fe New Mexican
Sept. 1, 2017 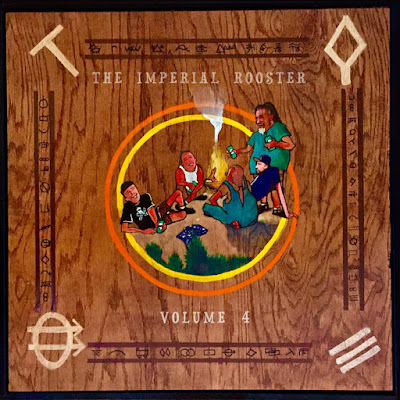 The Rooster crows once again! The pride of Española, that ragtag band of rounders, rowdies, and reprobates known as The Imperial Rooster is back with Volume 4 — their first full-length album since Cluckaphony four years ago.

The group has gone through a few personnel shuffles, but this record shows they’ve still got their basic chaotic, hillbilly-nuts, jug-band-riot sound full of banjos, kazoos, honking harmonicas, wild rhythms, drunken harmonies, and devilishly irreverent lyrics. In other words, it’s my kind of party.

The core of the Rooster still consists of Nat King Kong (Enrique Martinez) on vocals, harmonica, jug, and “hobophone” (a fancy kazoo-like device); Cootie Leroux (Rob Tomblinson) on vocals, guitar, and banjo; and Kohrn Sirrap (Randy Perraglio) on banjo, dobro, and guitar. The newest Roosters are Carlossus! The Count of Monte Carlos (Carlos Rodriguez) on bass and vocals and Perro De Mal (Luis Rodriguez, no relation to the Count) on drums.

The album is produced by none other than Joe Frankland, better known in underground-country circles as Slackeye Slim. Slackeye frequently played with The Rooster a couple of years ago when he was living in New Mexico. Now a Colorado resident, he also adds some lap steel, dobro, banjo, and saw on the Rooster’s tracks here. (Hey, Joe, it’s been at least a couple of years since your last album. You’re about due!)

The album starts off with “cluckaphonous” fanfare that almost reminds me of Beirut’s first album. But instead of trumpets, you hear kazoos, banjo, and Slackeye’s saw. That’s fitting because the song, titled “Dangerous Times,” is a faux Balkan stomp. The lyrics are a call to action against “thought police” who want to kick down your door. “We’re living in dangerous times,” the refrain goes.

Later in the album there’s a fast-paced song called “Wage Slave Revolt” — a fantasy of a revolution, burning down the mansions of the “greedy bastards” in a struggle to “protect our starving families and to take back all our land.” But the revolt doesn’t end well, as the greed-heads strike back with bomb-dropping drones. The minor-key melody sounds like some kind of centuries-old ballad that might have been sung by sentimental veterans of the Whiskey Rebellion or some other old thwarted uprising.

But speaking of whiskey, most of the songs on this album aren’t nearly as political as “Wage Slave Revolt” and “Dangerous Times.” In fact, most are geared toward good, goofy, drunken fun, with titles like “Hungover Again” (where the Roosters sing, “Nat King Kong started crackin’ jokes and we started cracking cans/Goddamn, I’m hungover again”) and “No One Likes Me” (The sad refrain: “I don’t know why nobody likes me/I swear I’m being cool, everyone wants to fight me”).

But the most powerful of the boozer tunes is “Prolly Die From Drankin’.” Nat King Kong describes the horrible liquor-soaked, liver-damaged fate of various family members, reminding me of “Dying Breed,” a stark and chilling song about a family’s substance abuse by Lonesome Bob (also recorded by Allison Moorer). However, The Imperial Rooster is employing dark humor here, turning the song into a grim joke. (“A six-pack leads to a 12-pack/And a 12-pack leads to I-don’t-know/And I-don’t-know leads to wakin’ up in a ditch.”) So you leave the song laughing, but fully aware of the pain beneath the punch lines.

Being that this is an Imperial Rooster album, there had to be a funny, bluesy devil song. After all, the very first song on their very first album, Old Good Poor Crazy Dead, was “Your Friends Think I’m the Devil,” while subsequent albums have had songs like “The Hoover Farm Exorcism” and “Anything Goes at a Rooster Show,” which talks about L. Ron Hubbard telling Satan about “inner light.” So on Volume 4, the devil gets his due on a hilarious dobro stomper called “Demons in Your Head,” which builds to a climax in which Cootie sings, “After a week when the bodies piled up I knew she had gone insane … I wish I’d never fell in love with that mama rattlesnake.”

The album ends with an acoustic waltz called “Old, Fat, and Stinky,” about a guy who matches that description. He also suffers from aching feet and impotence. He blames his wife, who lured him into a life of obesity with a ham sandwich (with chile and cheddar). Like “Prolly Die from Drankin’,” it’s funny, but funny with a bite.

You can hear and buy — don’t forget that part — Volume 4 and all Imperial Rooster music at their Bandcamp page. 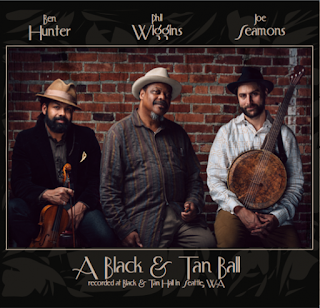 * A Black and Tan Ball by Joe Hunter & Joe Seamons with Phil Wiggins. No, this Seattle-based group is not as nutso as The Imperial Rooster, but fiddler Hunter and banjo man Seamons (joined here by harmonica player Wiggins) are the best string-band revival group this side of the South Memphis String Band (Alvin Youngblood Hart, Jimbo Mathus, and Luther Dickinson).

I knew I was going to like this album when I saw it starts off with “Do You Call That a Buddy,” a version clearly inspired by the one by Martin, Bogan, & Armstrong. It’s a funny little song about a guy plotting revenge on an ungrateful houseguest who eats all his food and tries to steal his woman.

Other highlights here are “Bad Man Ballad” (basically the murder song “Little Sadie”); a Louis Armstrong classic, “Struttin’ With Some Barbecue”; “Po’ Howard,” a tune from the Lead Belly songbook; and the jazzy “Do Nuthin’ Til You Hear From Me,” a Duke Ellington ballad that works just fine as an acoustic number.

HEre is Hunter, Seamons and Wiggins