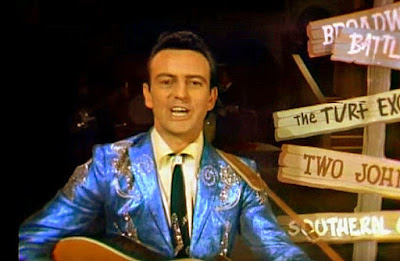 He was a soldier, a preacher and a honky tonk singer. He was an Okie who helped shape what became known as The Bakersfield Sound, recording a bunch of singles in the 1950s with a lead guitarist named Buck Owens. He wrote hits for Merle Haggard, Faron Young and Mel Tillis. Haggard wrote a song about him.

He was born Leonard Raymond Sipes, born Sept. 28, 1930 in Bethany, Okla. just outside of Oklahoma City. But he would become better known under his stage name, Tommy Collins. He would have been 87 today, but he died in 2000 before he reached 70.

I first became familiar with Collins in the mid '60s from his guest appearances on my favorite syndicated country music show, The Buck Owens Ranch. His songs were funny and a little suggestive. I thought he sounded like another Okie hero of mine, Roger Miller.

But he also had a serious side to his songwriting. Later, he'd write the dark tale of adultery called "Carolyn," which Haggard would turn into a hit.

Let's celebrate Leonard's birthday with some songs he did with Buck and The Buckaroos on the Owens show. Buck plays lead guitar on this one.

Here is Collins' version of "Carolyn." (I still like Haggard's version best.)


And here's the song Hag wrote for his friend.