THROWBACK THURSDAY: I'll Be Down to Get You in a Taxi, Honey 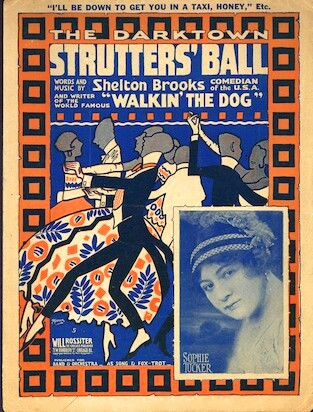 It was 50 years ago this week that one of the greatest rock 'n' roll albums of all time was thrust upon the world. This was the second album, a self-titled album by a band that called itself The Band. Fans came to call this work "the Brown Album."

It's the album that featured "Up on Cripple Creek" and "The Night They Drove Old Dixie Down" and "King Harvest Has Surely Come." And the opening scene is of a man being held at gunpoint,  for reasons never explained, by the woman he loves.

But even before I took off the plastic shrink wrap and opened my copy of The Band, the first thing that intrigued me was a cryptic inscription on the back cover"

“I’ll be down to get you in a taxi honey. Better be ready by half past eight. Now, honey don’t be late. I want to be there when THE BAND starts playing…”

They were song lyrics, credited to someone named Shelton Brooks, from a song -- that did not appear on the album -- called "The Darktown Strutters' Ball."

I was a mere high school lad at the time and I didn't know if this was a real song or what. But, even with the actual songs on the album being so rich, so magical, I knew that I'd never fully appreciate The Band until I got my ears on "The Darktown Strutters' Ball."

Like The Band told me, it was written by Shelton Brooks, a Canadian-born African-American jazz composer and was first published in 1917. That same year it was recorded -- in an instrumental version --by a popular group called The Original Dixieland Jazz Band.

One of the first versions to feature the lyrics was recorded later that year by Arthur Collins & Byron G. Harlan.

And in the rock 'n' roll era, another guy named "Fats" put his stamp on it.

In the mid '70s an Australian band called The Ted Mulry Gang made what is perhaps the whitest "Darktown" ever.