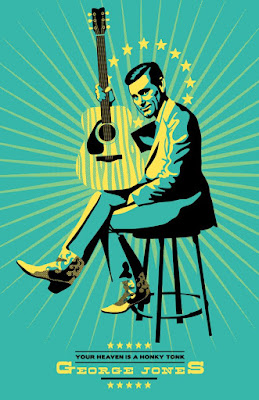 Just a couple of days ago, Sept. 12,  was the birthday of one of America's greatest country singers, George Jones. If he hadn't have died back in 2013, Jones would have been 86 years old this week.

I realized it was his birthday when scrolling through my Facebook feed and stumbled onto a great post on the
Bloodshot Records page.

"Like a real Possum, he keeps crawling up into our gutters and rummaging through our attic," the post said.  "We can't escape George Jones no matter how hard we try. Here's a playlist of Bloodshot artists covering songs written, recorded, and made famous by No Show Jones."

I immediately wished that I'd have thought of that first. Then I went to work coming up with a variation of the idea -- George Jones covers covered by various rockers who love him.

So let's have at it!

Here are The Geraldine Fibbers, a mid '90s band featuring singer Carla Bozulich, with live versions of not one but two Jones classics, "He Stopped Loving Her Today" and "The Grand Tour."

Dave Edmunds teamed up with The Stray Cats for "The Race is On."

The Blasters do a blues-soaked version of "Window Up Above"

And here's one of those wonderful Bloodshot bands, The Waco Brothers with "White Lightning"

Here is duet between Keith Richards & George Jones. For years, "Say It's Not You" has been a Santa Fe Opry favorite.

Possum himself could rock when he wanted. Here's a live version of Larry Williams' "Bony Maronie."

Finally, here is the Bloodshot Spotify list that inspired this post. Several of the songs are more associated with other artists like Hank Williams and Merle Haggard, but what the heck? (I've found it's best to have your Spotify already open before you start to play.)