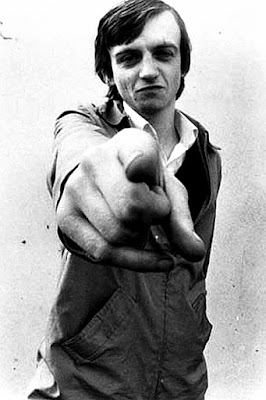 I'm so bummed out about the death of Mark E. Smith, the leader of The Fall, I'm just not up to doing a regular Throwback Thursday today.

Instead I'm just going to post a jumble of some of my ramblings about Smith and The Fall from various reviews I wrote of their albums (from 1989 to a couple of weeks ago.)

I never thought that first (and only) time I saw The Fall in concert, back in the early ’80s, that 30 years later [now closer to 40 years later] I would:
a) be reviewing a brand new Fall album and
b) find that fact reassuring.

Although Fall guy Mark E. Smith was surprisingly open and friendly when I interviewed him over a couple of beers at Evangelo’s that night — until then I thought I might be the only person outside my small circle of friends who loved both Johnny Cash and Captain Beefheart — The Fall’s concert was confusing and even a little threatening.

As I wrote at the time, I felt like Dylan’s Mr. Jones. I knew something was happening there, but I just didn’t know what it was. It took me a couple of years to appreciate and eventually love The Fall, though I’ve never really understood them.

I had never heard of The Fall but I was intrigued by their press kit. Instead of the hyperbolic raves and slick fluff that record companies crank out to hype their artists, The Fall's press kit consisted of several pages of poorly reproduced Xerox collages of weird photos, typewritten madness and and copies of their concert and record reviews -- many of them negative ... [Smith] carried a little tape recorder to preserve, he said, funny things he had heard on The Fall's American tour. Nonsequitous snippets of conversation, street noises, motel room televisions and so on. Part of the Evangelos interview became part of that tape.

More than a decade ago, in reviewing some Fall album or another, I wrote, “I doubt if all the CIA’s computers could crack the garbled ranting of Mark E. Smith.” In recent years I’ve been leaning toward a conspiracy-theory explanation for The Fall’s appeal to its scattered cult.

The band is actually sending coded messages to some alien/Lovecraftian sleeper cell. Some isolated Smith yelp in conjunction with some post-Standells guitar hook causes some shift in brain chemistry in some isolated listener, and next thing you know some unwitting Fall fan in Dalhart, Texas, is making a 4 a.m. drive to the Tucumcari airport to pick up a crate of something unspeakable delivered on a secret flight from Bohemian Grove.

He still sounds like a crazy old wino who loves to scream at you on the bus, his voice ranging from a menacing growl to a desperate rasp. That instrument is showing signs of wear and tear, but the craziness is still there. His current band is muscular enough to drive home Smith’s message. Whatever the heck that might be.

To the truly initiated, The Fall is everywhere. Every time you hear a car crash, a distant explosion, thunder cracking, a radio blaring static, a wino screaming profanities at nobody in particular — you hear the voice of Mark E. Smith ranting, grumbling, making rude noises in your head.

Now I Wanna Be Your Elf

Mark E. has left the Capitol.

And if that wasn't enough for you, here's my Spotify playlist featuring more than four hours of Fall music.