WACKY WEDNESDAY: The Wing Beneath My Wings 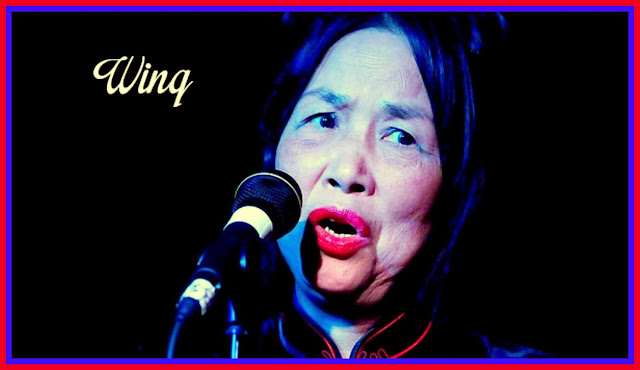 Back in 2005, there was an episode of South Park featuring a middle-aged Chinese woman trying to make it as a singer. Her name was Wing and she became a client of a "talent agency" run by Cartman and the boys.

She had a voice that would curdle your soup. Hilarity ensued.

Many South Park fans just assumed Wing was a cartoon character from the warped imaginations of Trey Parker and Matt Stone. But no. Wing was a flesh-and-blood human named Wing Han Tsang or Zēng Yǒnghán or 曾咏韓. From the scant biographical information I can find, it appears she originally was from Hong Kong and migrated to New Zealand, where she began her musical career by singing in nursing homes.

She released a CD of cover songs called Phantom of the Opera, (featuring the theme from the Andrew Lloyd Weber musical) and appeared on some TV shows in New Zealand and Australia.

The South Park guys discovered her via Internet buzz.  Her appearance there basically made her the Tiny Tim of 2005 -- even though her voice was closer to Mrs. Miller. Though she seemed to take her music seriously, she was considered a novelty act -- or by some, an "outsider artist."

Yes, we laughed at her, not with her. But she seemed like such a sweet, modest lady you felt like a jerk after the yuks.

Her career kept going for several years. She cranked out several albums between 2006 and 2008. and even making an appearance at the 2008 South By Southwest in Austin.

According to her Wikipedia page, she announced on her website that she was retiring from showbiz in 2015. That website is no longer online. And though the Allmusic Guide says she made a couple of records for CD Baby, I can't find them there. She's got a Facebook page, but she hasn't posted anything there in three years.

But there is a lot of material still available on YouTube, so Wing, this is for you, wherever you are.

She did this one on South Park.

Wing did a whole album of AC/DC covers. And hey, even Tiny Tim did "Highway to Hell."

This is one of the later Wing songs I could find. Produced by Rappy Mcrapperson, Wing truly lives up to her weirdness potential here.

Finally, here's some live footage of Wing. I guess we'd be going over that old rainbow ...