WACKY WEDNESDAY: The Worst of Elvis 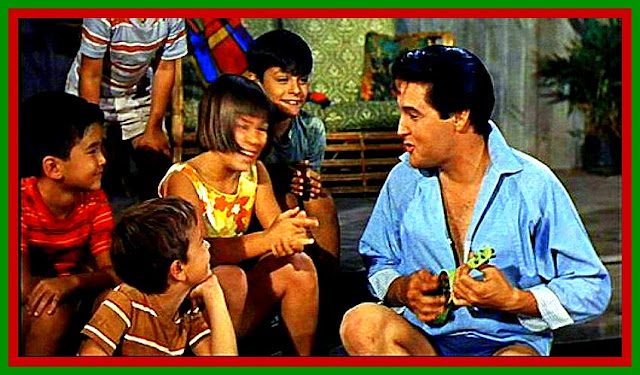 Most people who know me realize that I love Elvis Presley. His impact on music is undeniable. The power of his voice is almost supernatural. Elvis was King. I believe it. That settles it.

But even so, even a fan such as I (a fool, such as I) has to admit that Elvis dedicated way too much of his short time on Earth to producing crappy music. The vast majority of his crappy music was for his even crappier movies of the mid 1960s. His output during this era ranged from the sadly mediocre to the irritatingly corny to the horrifyingly awful (with a handful of rocking gems and beautiful ballads here and there.)

So I present these songs not to besmirch the memory of Elvis, who whose 83rd birthday was just a couple of days ago, but to have a couple of laughs in his honor. I think somewhere Elvis is laughing too.

Here's what many Elvis consider to be the low point of his catalog, "Queenie Wahine's Papaya" from Paradise Hawaiian Style (1966). He performs on the world's smallest ukulele,  telling a pointless story to a gaggle of island tykes.

In Fun in Acapulco (1963) Elvis shared this bit of widom: "There's no room to rumba in a sports car."

I bet Captain Beefheart was jealous that he didn't come up with the title "Song of the Shrimp" before Elvis did this song in the movie Girls! Girls! Girls! in 1962

And for those who can't get enough of bad Elvis, here is a Spotify list I put together a few years ago featuring those songs and many more.