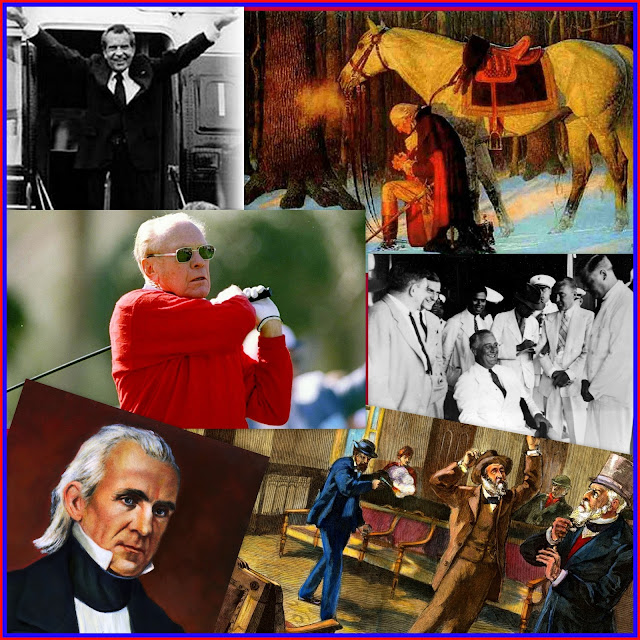 I’m a few days late in celebrating Presidents’ Day, but that inconvenient fact shouldn’t detract from this important American holiday. Actually, the holiday celebrated on the third Monday of February is still officially called “Washington’s Birthday,” though George’s actual birthday is Feb. 22. So I’m only a day late.

In honor of George and Abe and all the others, I’d like to present several tunes about past chief executives of this great land of ours.

* “Crazy Words, Crazy Tune” aka “Washington at Valley Forge” by The Jim Kweskin Jug Band. As it is performed by the greatest of the ’60s neo-jug bands, a listener might naturally think this tune is a surreal take on the life of the first president. The song starts out, “Washington at Valley Forge/Freezing cold but up spoke George/Said vo-doe-de-o, vo-doe-de-o, doe/Crazy words, crazy tune/All that George could croon and swoon.”

In the bridge, Kweskin tells of the father of our country playing his ukulele and shouting “red hot mama.”

The song actually goes back to 1926. It was written by Jack Yellen and Milton Ager (the men behind such ’20s hits as “Ain’t She Sweet” and “Hard Hearted Hannah”). In its original form, as recorded by Irving Aaronson and the Commanders, the “Washington at Valley Forge” part doesn’t appear until much later, sandwiched between couplets about Napoleon and Patrick Henry.

The original tune centers around a guy whose uke-playing neighbor, who I don’t believe is George Washington, is driving him nuts. I don’t know whether Kweskin rearranged the song himself or picked up this version from a more obscure source (more obscure than Irving Aaronson and the Commanders). Whatever the case, I salute his patriotism for putting George first.

* “James K. Polk” by They Might Be Giants. Ever so often, John Flansburgh and John Linnell write songs as if they’re moonlighting as writers for elementary school textbooks. “Why Does the Sun Shine?” is one of those. But the one they wrote about our 11th president — which appeared on their 1996 album Factory Showroom — is my favorite of these.

It’s also one of the few songs I know that uses the phrase “manifest destiny.”

* “Mr. Garfield” by Johnny Cash. There have been songs written about all four of our presidents who were assassinated. Strangely, the one I like best is about the president I know the least about, James Garfield, who was elected in 1880 and killed in 1881. Cash, who recorded it in the mid-’60s for his Sings the Ballads of the True West album, didn’t write the song. Ramblin’ Jack Elliott has the songwriting credit on this album, but there is a 1949 Library of Congress recording by banjo man Bascom Lamar Lunsford, who said he first heard it in 1903.

Wherever it came from, Cash makes the song his own, supplying a childlike wonder at the thought of someone shooting a great man like Garfield (“Charlie Guiteau done shot down a good man, good man”), as well as a very subtle shade of humor — as humorous as you can get in a song about a political assassination — especially in the conversation between the president and his wife, as Garfield urges the missus to find another husband if he kicks it.

* “FDR in Trinidad” by Atilla the Hun. The first version I ever heard of this classic calypso tune was the one by Ry Cooder in the early ’70s. It’s good, but it doesn’t match the sincerity and enthusiasm of the original by the Hun (Raymond Quevedo), which commemorates Franklin D. Roosevelt’s trip to the Caribbean island in 1936.

This is how folks in foreign lands used to react to visiting U.S. presidents:

“Struck by his modest style/We was intrigued by the famous Roosevelt smile/No wonder everybody was glad/At the great honor shown Trinidad.”

Barack Obama, who visited the land of the hummingbird in 2009, was the first — and so far the only — president since Roosevelt to go there. But if any songs were written about that 2009 trip, I haven’t heard them.

* “The Ex-President’s Waltz” by David Massengill. This sardonic tune by the Tennessee-born folkie first appeared in a 1985 edition of the Fast Folk Musical Magazine.

It has an irreverent verse for each living ex-president at the time: Jimmy Carter (“Once he was president, but now he’s a saint/Once he was president, but now he ain’t”); Gerald Ford (“Oh the president came to my country club to play in a charity game/But you had to watch out when he teed off/He was known to cripple and maim”); Richard Nixon (“Oh the president came to my library to autograph his latest book/With his 4 o’clock shadow and sweat on his lip/He assured us he’s still not a crook”).

There’s one for John F. Kennedy (“Oh for the days of Camelot/The president sure had a ball/From Nikita Khrushchev to Marilyn Monroe/By God, he screwed them all”), and one for the then-current president, Ronald Reagan (“Send him to Hollywood, give him a pass/Once he was president, you know the rest”).

Maybe I’m showing my age by liking this song so much. A lot of youngsters probably don’t remember Khrushchev or Carter, much less President Ford’s golfing mishaps. But that’s history, kids. My only problem is trying to figure why LBJ got left out of this little party.