WACKY WEDNESDAY: I Don't Think Jimi Done it That Way 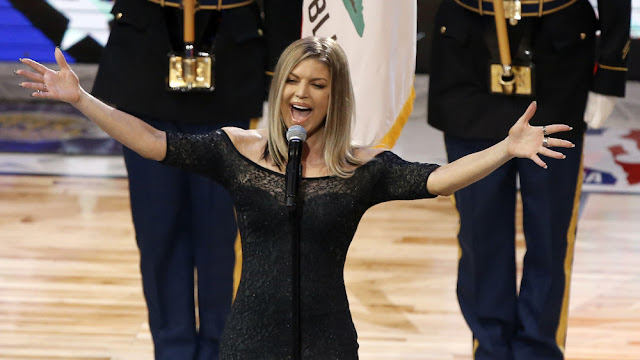 Over the weekend, the biggest threat to America and the freedoms we cherish was the version of "The Star Spangled Banner sung by Fergie, formerly with The Black Eyed Peas (not to be confused with The Dutchess of York) sung at the NBA All-Star Game.

I don't think that was how Jimi Hendrix intended it be performed.

True, Cosmopolitan called it "different AND sexy," but other reaction on social media was far less positive. (I think my favorite was comedian Johnny Taylor, Jr., who tweeted, "Not sure what Fergie was going for on that national anthem performance but if it was `my friends drunk mom acting sexy' she nailed it."

By Monday, the singer apologized in a statement saying, “I’m a risk taker artistically, but clearly this rendition didn’t strike the intended tone. I love this country and honestly tried my best.”

This whole stink reminded me of 1968, when at a World Series game, Jose Feiciano, known as "The Blind Puerto Rican Fergie," shocked an dismayed patriots everywhere by his unconventional take on the national anthem.

Back then, the anthem was generally performed by popular musicians of stage and screen, or talented first-responders and members of the military, always in a very straightforward way.

Feliciano's gentle, Latin jazz-infused version puzzled some people. And it outraged others.

"After I sang it, it was really strange to hear me being booed, as well as yay'd, and I didn't know what happened," he recalled when I reached him by telephone last week, while he was on tour in London.


A Tigers official told him the club's phones were lighting up with angry calls from around the country: "Some veterans were taking off their shoes and throwing them at their television screens," he was told.


Jumping ahead a few decades, I do like this version of the anthem by the group Patax, "a communion between flamenco, funk and Afro-Cuban folklore" from Spain.  "Star Spangled Banner" appears on their latest album, Creepy Monsters.

On their Youtube channel the band says the song is their, "humble contribution to tolerance and mind openness sending a musical message to the Trump Administration: lets make America open minded and tolerant again. Greatness will be the result."

What kind of commie talk is that? (By the way, percussionist Jorge Perez is a citizen of both Spain and the US of A.)

And if you don't like that, there's always Tiny Tim. He even knew the largely forgotten second verse  ...