For those of you who didn't hear my startling announcement on KSFR over the weekend, here's the news:

I've decided to pull the plug on my Friday night show, The Santa Fe Opry. The last lonesome show will be this Friday.

I've been doing this hillbilly/alt-country/ rockabilly/bluegrass/roots-rock show for more than 20 years. I love the music and I love doing the show.

But after much consideration following my recent health scare, I’ve decided to cut my time on the radio back to one night a week.

I decided to ax the Opry rather than Terrell's Sound World on Sunday for a few reasons.

First of all, having a Friday night slot made it stressful at work whenever it was a heavy news day. Anyone involved in the journalism racket knows that some government officials delight in what's known as the "Friday night news dump" -- waiting until 5 pm to make important announcements and or answer public-records request.

Secondly, while all us DJs have our own styles, there are other programs at KSFR that specialize in country and folk sounds -- Acoustic Explorations on Thursday nights, Tom Adler's Folk Remedy on Sunday mornings. And Donna Howell often dips in these waters on her Gotta Dance show on Sunday night. Meanwhile over at KUNM, The Home of Happy Feet -- which is a major influence on The Santa Fe Opry -- is still going strong.

But there isn't really any other show around these parts that specializes in the garage/punk music that is the basis for Terrell's Sound World. So that's a big reason I decided to keep my Sunday night slot.

However, as I said this weekend, from this point on more hillbilly sounds will surely creep into the Sound World mix.

Also, despite all the fun I had doing to the show, I failed to achieve one of the goals I had for the program -- getting a cease-and-desist letter from the Santa Fe Opera.

So as of last week, KSFR is looking for a replacement for my 10 p.m.-midnight slot on Fridays. My hope is that someone steps up and continues The Santa Fe Opry -- or something close to it. Of course, that might not happen. If you or someone you know is interested, contact operations manager Sean Conlon at sean@ksfr.org

Thanks to all those who tuned in over the years, called me at the station or dropped me an email or Facebook comment. Please tune in 10 p.m. Friday, June 15, for a special farewell Santa Fe Opry show. 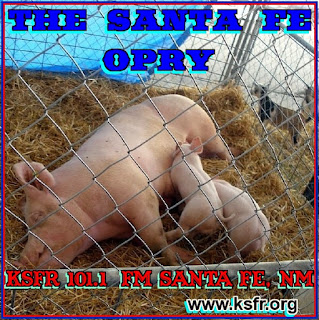