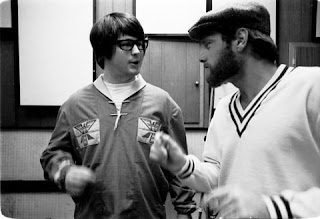 It's Brian Wilson's birthday! The songwriter and architect of The Beach Boys' sound is 76 years old today.

Though he's best known for his beautiful melodies and flawless harmonies, Wilson also was responsible for some outright wackiness on early Beach Boys albums.

It was supposed to be a dumb skit about a conflict between Wilson and singer Mike Love that appeared on their 1964 album Shut Down Volume 2.

It's not likely that anyone in 1964 would have realized that this painful stab at comedy actually foreshadowed decades of strife between Wilson and Love.


A year later, the album Summer Days (and Summer Nights !!) included a bizarre doo-wop parody called "I'm Bugged at My Ol' Man." At the time it seemed sweet and silly. But back then we didn't know about the Wilson boys' abusive father Murray Wilson.

The video below was recorded about a decade after  "I'm Bugged at My Ol' Man." was released.


Unlike the first two, this song isn't throwaway material. Musically, it fit in well with the other songs on Love You (1977). Still, any song heaping near-religious praise unto Johnny Carson has to be considered wacky. And Wilson doesn't disappoint.