A version of this was published in The Santa Fe New Mexican
July 20, 2018 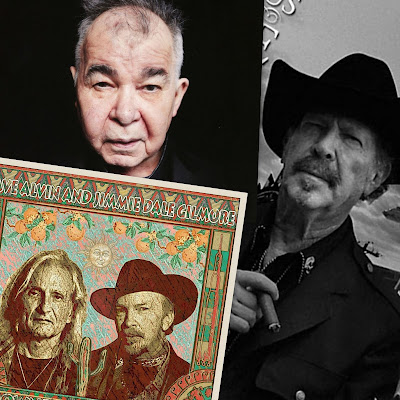 Let us now praise the fabulous seventies. No, I’m not talking about the 1970s, the decade. I’m talking about a bunch of new albums by country/folk/roots artists who are septuagenarians — Kinky Friedman (73), John Prine (71), and Jimmie Dale Gilmore (73), the latter of whom just released a duet record with a younger musical partner, Dave Alvin, a mere lad of 62. While none of these works reach the heights of the music that made us love these guys in the first place, all three albums are worthwhile and welcome efforts that deserve some time in your eardrums.

* Downey to Lubbock by Dave Alvin & Jimmie Dale Gilmore. This is the first time Gilmore and Alvin have made a record together, but the Downey/Lubbock collection goes back decades. Back in the early ’80s, Alvin’s old band The Blasters toured with Joe Ely, who, along with Gilmore and Butch Hancock, was in The Flatlanders, Lubbock’s greatest act since Buddy Holly and The Crickets. Ely played on the same bill with The Blasters in 1982 at the Golden Inn.

Ten of the 12 songs here are covers, including those written by Woody Guthrie (a haunting “Deportee [Plane Wreck at Los Gatos],” sung by Gilmore); Texas bluesman Lightnin’ Hopkins (a nice and rowdy “Buddy Brown’s Blues”); Lloyd Price (“Lawdy Miss Clawdy”); Brownie McGhee (“Walk On”); and not one, but two from the vast songbook of The Memphis Jug Band (“Stealin’ Stealin’ ” and “K.C. Moan”).

Tracks from more recent artists abound. For instance, the Mexican-flavored tune called “The Gardens” is a sad number about violence in the barrio written by Alvin’s late sideman and crony Chris Gaffney. It’s a highlight of the album, as is the late Steve Young’s “Silverlake,” a lilting bittersweet blues.

Alvin wrote two new tunes for this album, including the title cut as well as “Billy the Kid and Geronimo.” This is about a fictional meeting between the two at some bar in Lordsburg. “Billy The Kid said, ‘We’re just the same./We’re cursed and we’re damned as they whisper our names’ … /Geronimo said, ‘No, We’re not the same, for the harm I have done, I feel great shame/I fought for my family, my tribe and my land/But we’ll pay the same price for the blood on our hands.’ ”

I could have done without the new version of the old Youngbloods hippie peace ’n’ love anthem, “Get Together.” (I thought it was sappy back in the late ’60s. It’s no better now.) But that doesn’t stop me from being happy that Gilmore and Alvin got together for Downey to Lubbock. 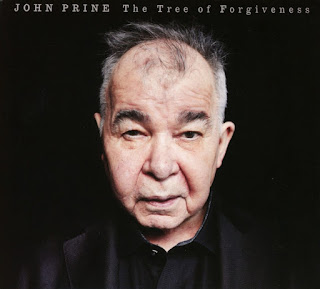 * The Tree of Forgiveness by John Prine. As has been true throughout his career, Prine’s goofy grin is practically audible in many of the songs on his new album — his first collection of new original songs in 13 years.

And he has a lot to grin about. For instance, the awkwardly titled “Egg and Daughter Night, Lincoln Nebraska, 1967 (Crazy Bone).” Here Prine sings, “If they knew what you were thinkin’/They’d run you out of Lincoln/Just blame it on that ole’ crazy bone.”

“Lonesome Friends of Science” is a strange bird as far as songs go — even by Prine standards. I listened to it a couple of times and practically pulled out what’s left of my hair trying to figure out where I’d heard it before. Then it finally hit me that this is a sardonic, almost surreal rewrite of Townes Van Zandt’s “Pancho and Lefty.” The melody is subtly similar to “Pancho,” as are a few lyrical turns. But Prine’s song is full of sublime nonsense. He laments the loss of planet status for Pluto, and sings about the Vulcan statue in Birmingham, Alabama: “Venus left him long ago/For a guy named Mars from Idaho …” And in the chorus, Prine sings, “The lonesome friends of science say/‘The world will end most any day’/Well, if it does, then that’s okay/’Cause I don’t live here anyway …”

In the final song, “When I Get to Heaven,” Prine sings with glee about the possibility of going to heaven. Speaking, not singing the verses, he says, “Then God as my witness, I’m gettin’ back into show business/I’m gonna open up a nightclub called The Tree of Forgiveness/And forgive everybody ever done me any harm ...”

Personally, I’m not a big believer in heaven. But albums like these make this earthly plane just a little more heavenly. 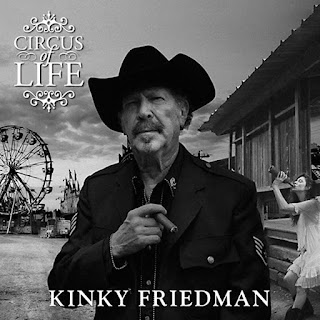 * Circus of Life by Kinky Friedman. Kinky has built a career on the outrageous, politically incorrect, funny, and raucous songs he recorded in the mid-1970s, tunes like “They Ain’t Makin’ Jews Like Jesus Anymore,” “The Ballad of Charles Whitman,” and “Get Your Biscuits in the Oven and Your Buns in the Bed.” So it may be surprising that this — Kinky’s first album of new original songs in more than 40 years — is dominated by slow, somber, and quiet tunes.

So if it’s the cigar-chomping, wisecracking Friedman you’re looking for, this ain’t the album for you. In fact, my initial reaction was this wasn’t the album for me. But after a couple of listens, these songs by the aging, more reflective Friedman started to grow on me. The title song is not about an actual circus. It’s about old people coming to grips with their lives of regret and desperation. Then there is “Jesus in Pajamas.” You might think this would be one of Kinky’s twisted religious parables. Instead, it’s about a destitute man at a Denny’s in Dallas.

While I’ll always remember Kinky for his funny stuff, Circus of Life is a sweet glimpse at another, deeper side of the artist.

Alright ...How about some videos?

Here are the wild blue Blaster and the old Flatlander ...

"The lonesome friends of science say/`The world will end most any day' ..."