A version of this was published in The Santa Fe New Mexican
July 6, 2018 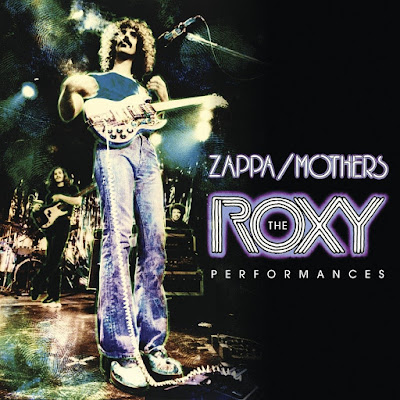 Here’s a true treat for all the Frank-o-philes out there: A new box set called The Roxy Performances features seven action-packed compact discs that include six full concerts plus a bunch of studio tracks (recorded at Ike Turner’s Bolic Sound Studios), rehearsal takes and sound checks by Frank Zappa & The Mothers in those golden days of December, 1973.

What a mighty time! Richard Nixon was preparing for his final Christmas in the White House. Gerald Ford was sworn in as vice president, replacing Spiro T. Agnew, who was convicted in a kickback scam earlier in the year. The spacecraft  Pioneer 10 took the first close-up images of the planet Jupiter. The Exorcist debuted in movie theaters that month.

And Zappa played the Roxy, a Hollywood Club that had just opened less than three months before.

Arguably (and Zappa fans do love to argue) Daddy Frank was at the height of his creative powers during this area . And the Roxy-era Mothers were complete monsters. Keyboard man George Duke, the incredible Ruth Underwood on marimba, xylophone, vibraphone and percussion and singer/sax man Napoleon Murphy Brock are among Zappa’s most valuable players and their playing on these tracks only cement their positions. Duke and Brock had roots in jazz and funk while Underwood was classically trained. In this version of The Mothers, they helped create a complex musical backdrop complimenting Zappa’s wilder musical visions -- but not stepping on his trademark low-brow dirty jokes that helped draw in the masses.

By my count, this is the fourth Zappa product based on those ‘73 Roxy gigs. There was  Zappa’s 1974 album Roxy and Elsewhere (which featured most live material from those shows (and other non-Roxy tracks), much of which over-dubbed and remixed by perfectionist Zappa. Then four years ago there was a single-disc compilation, Roxy by Proxy, culled from those shows. Then in 2015 the Zappa Family Trust released a DVD featuring video from the Roxy shows. This package included an audio disc full of Roxy recordings.

Despite the sheer size of The Roxy Performances, this is a reasonably priced box set. It’s about $43 on Amazon, which ain’t bad.

The new collection includes multiple versions of “Penguin in Bondage,” “Cheepnis” (I’m just a sucker for a tune that starts off “Ate a hotdog, tasted real good …”), “Village of the Sun,” “Don’t You Ever Wash That Thing,” and "Be-Bop Tango (Of the Old Jazzmen's Church)." And then there’s “Pygmy Twylyte” There are six versions ranging in length from four to 20 minutes. Also there are versions of various songs from other Zappa albums of the era, such as Overnight Sensation (“I’m the Slime,” “Montana”), Apostrophe (“Don’t Eat the Yellow Snow,” “Cosmic Debris”) and One Size Fits All (“Inca Roads.”)

And there are older songs too, such as “The Dog Breath Variations” from Uncle Meat and “The Idiot Bastard Son,” which first appeared on Zappa’s 1968 classic We’re Only in For the Money. (“His father’s a Nazi in Congress today / His mother’s a hooker somewhere in L.A.” …”)

The melody of this song reappears during a Roxy rehearsal but with new lyrics directed at the then commander-in-chief and leader of the free world. Zappa re-titled it “That Arrogant Dick Nixon.” This song isn’t nearly as powerful as the original “Idiot Bastard” -- which probably is why Zappa never put it on an album during his lifetime.

My only quibble about The Roxy Performances is that in addition to all the fantastic music there is an overabundance of the musicians tuning up, noodling and screwing around. I can’t help think that even the most zealous Zappa completist wouldn’t object to just a little judicious editing to snip out the dead air, which mostly takes place at the outset of the four concerts. But I can live with this collection as is. Zappa was a giant -- a musical madman, a hilarious comic, an acid-tongued social commentator. 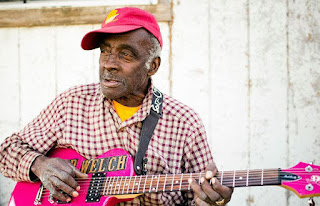 * Late Blossom Blues: The Journey of Leo “Bud” Welch. In 2014 a new gospel and blues star emerged. Leo “Bud” Welch of Bruce, Miss. released his very first album, Sabougla Voices, a collection of 10 stinging gospel songs. Welch was a mere lad of 81 at the time. He quickly followed that up with an almost as powerful  blues record called I Don’t Prefer No Blues and began touring. (He played Taos Mesa Brewing in early 2015.)

Late Blossom Blues, released on DVD earlier this year, is a documentary directed by Wolfgang Almer and Stefan Wolner, telling the story of Welch’s short but satisfying musical career.

Welch’s devoted manager Vencie Varnado helps tell the story. Varnado recalled he was only 12 when he first heard Welch play -- at a gig for which “nobody showed up.” After Varnado got out of the Army, he rediscovered Welch, who by that point had stopped playing blues and had taken his music to the church.

He recorded some live footage of the old man and pitched Welch to Fat Possum Records, the company that introduced the world to Junior Kimbrough, R.L. Burnside and T-Model Ford. Some record company flunky told him “Well we don’t do blues anymore …” Varnado, however insisted on emailing a video clip to the company. And, he says, only minutes after pressing “send,” Fat Possum honcho Bruce Watson called him and within days Welch was in the studio.

There is plenty of impressive performance footage from festivals as well as Mississippi juke joints and plenty of scenes of Welch being crotchety and loveable. And over the end credits there is a video of a much younger Welch in church with a gospel band singing a righteous version of “Praise His Name,” the first song on  Sabougla Voices.

Welch died last December, after the documentary was already making the film festival circuit. He wasn’t able to take advantage of Late Blossom Blues. But hopefully the movie will lead more people to his music.

Here's the trailer for The Roxy Performances:

Here's the trailer for the Leo Welch doc

And here's a live version of "Girl in the Holler."