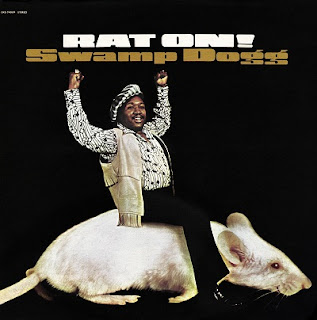 Seventy six years ago today, July 12, 1942, Jerry Williams, Jr. was born in Portsmouth, Virginia. He grew up to be a songwriter, record producer and recording artist. In fact, at the age of 12 in 1954, Williams recorded his first song,  "HTD Blues (Hardsick Troublesome Downout Blues)", for a label called Mechanic Records. In 1966, under the name "Little Jerry Williams," he had an actual minor hit,  "Baby You're My Everything."

But by 1970, Williams transformed into something weird and wonderful: Swamp Dogg. As the artist later explained.

I became Swamp Dogg in 1970 in order to have an alter-ego and someone to occupy the body while the search party was out looking for Jerry Williams, who was mentally missing in action due to certain pressures, mal-treatments and failure to get paid royalties on over fifty single records ...  Commencing in 1970, I sung about sex, niggers, love, rednecks, war, peace, dead flies, home wreckers, Sly Stone, my daughters, politics, revolution and blood transfusions (just to name a few), and never got out of character. Recording in Alabama and sincerely singing/writing about items that interested me, gave birth to the name Swamp Dogg.

So happy birthday, Mr. Dogg. Here are some of my favorite Swamp Dogg tunes:

The first time I saw him perform live -- at a South by Southwest in the late 1990s, his best song was a heart-wrenching take on this John Prine tune.

The next time I saw him was at the Ponderosa Stomp in New Orleans in 2013. In the best tune of his set, Swamp Dogg proved you can even find soul in a Bee Gees song. As I wrote at the time:

At the end of the song, he stepped off the stage and walked out into the audience shaking hands while repeatedly singing the refrain, "I've just got to get a message to you / Hold on, hold on ..." Sometimes he'd complete the chorus, "One more hour and my life will be through ..." After several minutes of this I almost started to believe that he was going to take that whole hour.

This one, "Born Blue" is from Swamp Dogg's first album, Total Destruction to Your Mind. Here he asks the important question, "Why wasn't I born with orange skin and green hair like the rest of the people in the world?"

And speaking of the Ponderosa Stomp, here are a couple of songs from Swamp Dogg's set,  "Total Destruction To Your Mind" followed by "Synthetic World."