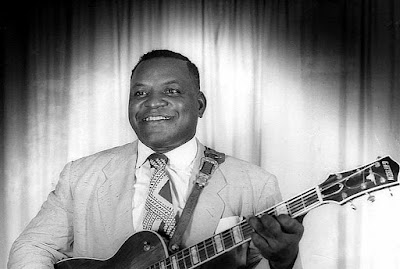 One hundred and five years ago on this date a child named Overton Amos Lemons was born in DeQuincy, Louisiana, near Lake Charles. His mother died when he was a teenager. Young Overton jumped a freight train that took him to New Orleans. There he transformed into Smiley Lewis and became one of that city's most respected blues singers.

"Depending on the situation, Smiley possessed a voice that could shake the shot glasses off a South Rampart Street bar or lullaby a baby to sleep," s 1993 profile in Offbeat said. "One of New Orleans’ most prolific artists, between 1947 and 1965 Lewis recorded some of the most enjoyable and consistent R&B put on wax."

The article quoted famed New Orleans record producer Dave Bartholomew, (who wrote and produced many of Lewis’ best songs: "Smiley had one of the best voices we had around,” Bartholomew said “But it didn’t pay."

Offbeat explained: "Despite recording the original and superior versions of such classics as `Blue Monday,' 'I Hear You Knocking' and 'One Night,' and leaving an enviable body of work, the times and the quirks of the record business held his career back."

Basically, Lewis' problems was that his songs kept getting covered by more famous artists like Fats Domino.

Here are a few Smiley songs that should have been hits. Let's start with his record with which he introduced himself to anyone with ears to hear, "Here Comes Smiley."


This ne is called "Lillie Mae," which was his mother's name.


And here's a song that Elvis Presley later made famous.