Eighty-one years ago yesterday, Sept. 26, 1937, Bessie Smith, the Queen of the Blues, died from injuries she received in a car wreck in Coahoma, Miss., between Clarksdale and Memphis. She was 43.

According to American Blues Scene, she and her boyfriend/manager Richard Morgan were traveling down Highway 61 in an old Packard. They hit a truck that was parked on the side of the road. The man in the truck fled. A doctor named Hugh Smith and a fishing buddy stopped. 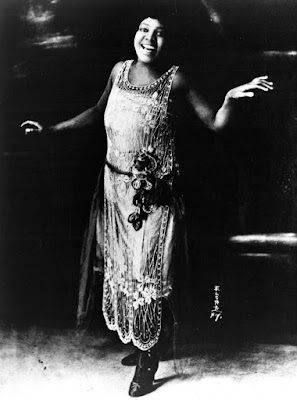 It was 2 a.m. Smith and his associate jumped out of the car, and by the light provided by the headlights, examined Bessie. Her right arm had been torn completely loose at the elbow. Dr. Smith said “..in essence, a traumatic amputation…”. The artery in her arm was still intact, and she was bleeding profusely. Dr. Smith applied a tourniquet. Bessie also had severe internal injuries to her chest and abdomen. She was conscious.

Then another car smashed in the doctor's vehicle.

It has been largely reported, most notably in Down Beat, that Bessie Smith was taken by ambulance to a white hospital, where she was turned away. From there, she was taken to G.T. Thomas Afro-American Hospital (now the Riverside Hotel) where she was pronounced dead. No records, if they ever existed, were found concerning her stay at the hospital. Could the white hospital have saved her? The short answer is no. First of all, the two hospitals were not even a half-mile apart. Secondly, in 1937 in the deep south, where almost everything was segregated, no ambulance driver would even think of taking a black patient to a white hospital.

According to the American Blues Scene article, "Dr. Smith would later say Bessie would have died from her injuries even if the accident happened outside the city hospital. They were simply that severe."

But enough about Bessie's death. Let's celebrate her art.

Below is "Wild About That Thing," the first Bessie Smith song I ever heard, as a college freshman at the University of New Mexico in 1971. Either this song or the very similar "You've Got to Give Me Some."

"Gimme a Pigfoot and a Bottle of Bear" is one of Bessie's most popular tunes.

Another longtime favorite, "Send Me to the 'Lectric Chair."

Finally, Bessie even tried a little gospel music -- though I'm pretty sure her tongue was in her cheek when she sang "Moan You Moaners."