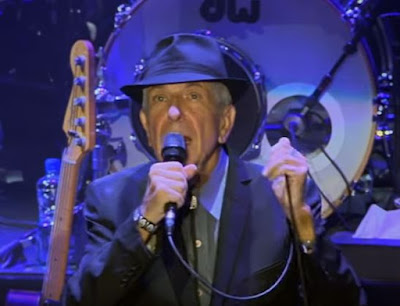 Tomorrow is Leonard Cohen's birthday. Cohen, who died in 2016, would have been 84.

Here are a few of my favorite Leonard songs, starting with the first one that grabbed me, "So Long Marianne," which was on his first album, Songs of Leonard Cohen (1967). The version below is from a German TV appearance in 1979. (The violin solo that comes in right before the 3-minute mark is jaw-dropping.)

Thank you for guarding my morality!

I know that we celebrated The Austin Lounge Lizards only yesterday, but I'd be remiss if I didn't include the greatest Leonard Cohen spoof in human history.