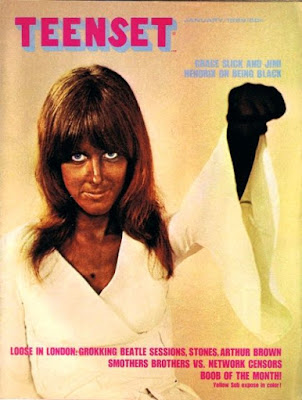 Hers is the voice that launched a thousand trips.

Grace Slick, lead singer of the classic Jefferson Airplane line-up had the pipes. She had the looks. She had the intensity. And she had a great sense of humor and, now and then a crazy willingness to express political opinions through her clothes -- and in one case, make-up. This was obvious from the start of the Airplane's national popularity.

Grace will turn 79 next month. But from interviews with her I've read in recent years. she's still got the rock 'n' roll spirit -- even though she's been retired from music for years.

David Crosby, back in the daze, once dubbed Slick "The Chrome Nun." Maybe the video below could explain that.

Check out her sexy nun outfit on the band's June 1967 appearance on American bandstand. (A couple of Voodoo Rhythm artists, drummer Erica Toraldo of The Devils and Reverend Beat-Man's beautiful accomplice Nicole Izobel Garcia carry on that tradition today. (Also worth soaking in is America's Oldest Teenager talking about how San Francisco is "where it's at ...")


A little more than a year later, Grace appeared with The Airplane on The Smothers Brothers Comedy Hour.  She was in blackface, a move that Dangerous Minds called an "insane and mercifully short-lived" phase.

Slick maintained that the gesture was one of solidarity with either the Black Power Movement generally or Angela Davis specifically ... I can’t imagine how anyone could think that the intent of solidarity could possibly trump the massively offensive history of minstrelsy ineradicably attached to blackface performance. But it could have been just a blip if Slick hadn’t doubled down, appearing on the January 1969 cover of Teenset magazine in blackface. Giving a black power salute. (Irony abounds in that mag ...)

Is that why Tommy Smothers called her "Grace Sick"?

Yeah, blackface in retrospect was a dumb move.

Still, As Al Jolson might say, I'd walk a million miles for one of her smiles.


Finally, on Sept. 29, 2001, Slick appeared at a gig by The Jefferson Starship wearing a burqa. She creeps around the stage for a couple of minutes before taking it off, revealing some kind of American flag garment with the words "Fuck Fear"on the back.

"That outfit I had on is not about Islam, it's about oppression," she says about the burqa (at the 2:45 mark), right before singing "Wooden Ships" adding, "This flag is not about politics, it's about liberty."