“I hold the key to the sea of possibilities ...”

“Outside of society if you’re looking/That’s where you’ll find me ...”

“Jesus died for somebody’s sins, but not mine ...”

This is just a tiny sampling of the lyrics of Patti Smith, just a brief glimpse of the wild incantations that spoke directly to my twenty-something self. With the help of her devastating band, especially guitarist Lenny Kaye, Patti brought me new faith in rock ’n’ roll — which, by 1975, when her first album, Horses, was released, had for the most part gotten soft and tired. Patti’s lyrics were mystical battle cries for rebellious souls who’d been wondering where all the rebellion had gone.

Back in the post-Watergate era, she made good on the promise that Janis Joplin couldn’t keep: “I’m gonna show ya, baby, that a woman can be tough.” She carjacked Wilson Pickett’s “Land of 1,000 Dances,” shouting, “Seize the possibility!” And those of us who heard the urgency of her call could never understand why others could ever dig Frampton Comes Alive!.

Patti comes to Santa Fe on Saturday, Jan. 19. No, it’s not going to be a crazy rocking concert like the one she did under a big tent next to SITE Santa Fe with her band in the summer of 1997. She’ll be reading passages from her recent books — Devotion, M Train (which I’ve read and recommend), and Just Kids. The Jan. 19 event at the Lensic Performing Arts Center is being billed as an “evening of stories (and an acapella song or two) about love, loss, art, and New York City.”

(Bad news for us procrastinators: The show has been sold out.)

But back to the old daze: After I graduated from college in 1976, I decided I should announce my arrival to the “real world” by sending jackalope postcards to the three people I admired the most — Rodney Dangerfield, Billy Carter (the beer-drinking good old boy brother of Jimmy Carter, who’d just been elected president), and of course, Patti Smith. I don’t quite remember the logic behind this weird stunt, if indeed there was any. It just seemed like a cool thing to do. 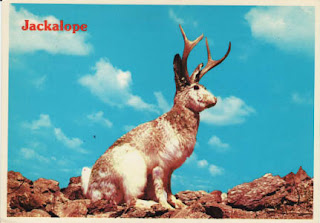 Amazingly, all three of my postcards got responses. Rodney, or at least someone in his official fan club, sent me an autographed glossy black-and-white publicity photo. Billy sent me a postcard featuring a color photo of himself holding a beer can, naturally, at the gas pumps of the service station he ran in Plains, Georgia.

But Patti sent me the coolest response of all. It was a plain white postcard with a sticker for her then-latest album, Radio Ethiopia (still my favorite Smith album, though most critics disagree), and a handwritten personal message. “Dear Friend S.S.,” it began. She’d gotten my last name wrong — blame my “alternative penmanship” — addressing her card to “Stephen Sevele.”

She continued, “Thanks for the Jackalope ... Is real cool.” (I knew she’d understand! Then she addressed a question I’d asked her on my card.) “Bull Dog Brawer is my favorite wrestler,” she said, referring to Richard Gland, who wrestled under the name of Dick “Bulldog” Brower. “I think wrestling is a lot like Blue Oyster Cult … Happy maniac energy.”

Those “Olympic injuries” were no joke. On Jan. 23, 1977 — 42 years ago next week! — when opening for Bob Seger (!) in Tampa, Smith tripped on a sound monitor and fell from the stage, a drop of about 15 feet, into the orchestra pit, leaving her with a fractured spine and broken vertebrae in her neck. In 2012 she told Uncut magazine that she still suffers from those injuries. “My neck,” she said. “I still get discomfort, spinal discomfort. It’s nothing I can’t live with.”

I sent her a couple more postcards, and she replied, though the responses got shorter and shorter. I still treasure the note in which she wrote the phrase “Tongue of Love” on a green slip of paper. I display it in my front room, right with the autograph from Wilson Pickett I got a few years later. Both are sacred talismans, chiding me because I never learned how to pony (like Bony Maroney), as the song goes.

Though she’s never matched the impact and intensity of her first three albums in the ’70s (the two mentioned above plus Easter, released in 1978), I’ve remained a fan. I’ve seen her live three times — in New York and in Santa Fe in 1997, then in Austin during South by Southwest in 2000. Each of those were full of what only can be described as “happy maniac energy,” on the part of Patti, her band, and her audience.

Sure, I’d much rather see Patti the rocker, making thunder with Lenny and the boys, than politely listen to a sedate poetry reading.

But this lady is a true artist. She’s seventy-two years old and has given her heart and soul to rock ’n’ roll. She’s long ago earned the right to present her visions any way she sees fit. We all should feel lucky that she’s still out there, sailing the sea of possibilities. 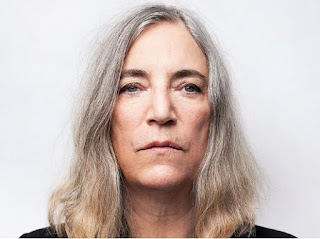 Here's a Patti primer on Spotify