A version of this was published in The Santa Fe New Mexican
March 8, 2018 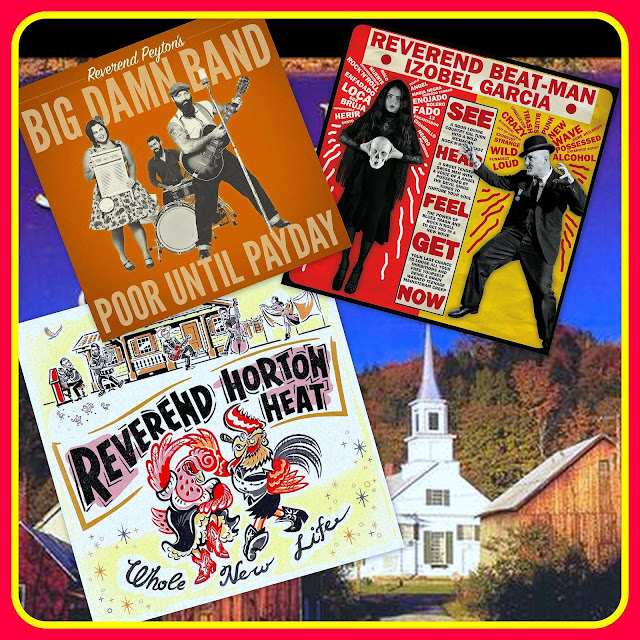 I’m not sure how religious you gentle readers are, but I’m going to spotlight the latest albums by three righteous rock ’n’ roll reverends — the Reverend Horton Heat, Reverend Peyton, and Reverend Beat-Man. (Sorry, Reverend Gary Davis, but you’re, uh, dead.) All of these hell-raising holy men preach wild gospels that, to those with ears to hear, can lead to sweet salvation. 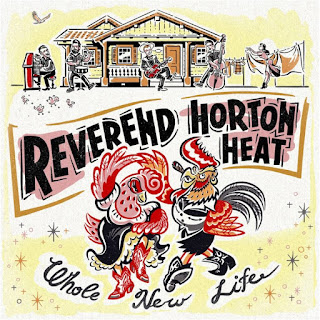 Let’s start with Rev. Heat, aka Jim Heath, the longest running member of this trinity, and his new record, Whole New Life. The Dallas native’s debut album, Smoke ’Em If You Got ’Em, was released by Sub Pop Records around the height of that influential label’s heyday, back in 1992.

Heath didn’t invent the term “psychobilly,” which was sometimes used to describe The Cramps in the late ’70s and early ’80s and was picked up by a bunch of British bands like The Meteors and Demented Are Go later in the ’80s.

But the term has been applied to Heath and his band, and they helped popularize it via an instrumental on their first album called “Psychobilly Freakout” — which, judging by the couple of times I’ve seen him perform, remains perhaps his most requested number.

Nobody would call Reverend Horton Heat “psychobilly” anymore. Like most of us who were around in the early ’90s, he’s mellowed and his songs aren’t quite as frenzied as they used to be. But he’s still got a rockabilly heart and the new album has plenty of high-powered rump-shakers. “Perfect” is a perfect example, as is “Got It in My Pocket.” (No, it’s not a rocket, like that old 1958 rockabilly classic by Jimmy Lloyd goes. It’s a diamond ring for a woman to whom he’s going to propose.) 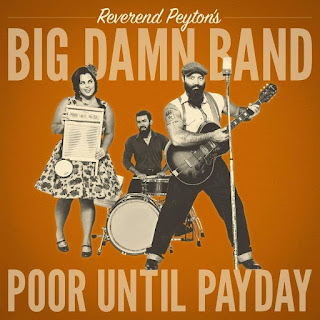 The Big Damn Band — which includes the reverend’s wife, Breezy Peyton, on washboard and background vocals, and drummer Maxwell Senteney — doesn’t break a lot of new musical ground. Basically, if you liked any of their blues-infused, touched-by-gospel albums in the past 15 years or so, or if you’ve enjoyed any of their live shows (they’ve played in Santa Fe and Albuquerque several times in recent years), chances are you’ll like this record.

While Peyton has yet to top his greatest song (“Your Cousin’s on Cops,” from 2008’s The Whole Fam Damnily), there are some fine new tunes in this latest batch. The rousing title song is a soulful rocker about a guy promising to show his woman a good time once his next check comes.

“Get the Family Together” is a rowdy but sweet little tune with some good advice: “Don’t wait for a funeral to get the family together.” And, speaking of funerals, “Church Clothes” is an acoustic song about a guy who needs decent threads because “you know we got the worst kind of call/and I can’t go to town in these dirty overalls.”

And just like Reverend Heat’s latest, Reverend Peyton’s new one has a song about a street in New Orleans. Unlike “Tchoupitoulas Street,” “Frenchmen Street” doesn’t have a lot of Professor Longhair in it. (No piano, for one thing.) And there isn’t a hint of brass either, but every time I hear it, in my mind’s eye I see and hear the impromptu brass band I saw forming one night on Frenchmen Street a few years ago. 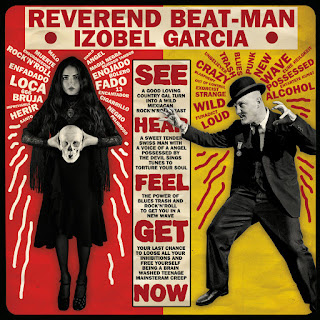 And then there’s Reverend Beat-Man, aka Beat Zeller, a Bern, Switzerland, wild man who is more than just a “reverend” when it comes to primitive, trashy rock. He’s the high priest — naw, he’s the dang pope — of “Blues Trash Folk Noir,” the name he gives to the music on Baile Bruja Muerto, his latest album, which is co-credited to Izobel Garcia, a honey-voiced singer (who also plays drums and keyboards) from Los Angeles. Garcia collaborated with Beat-Man on last year’s dandy album, Blues Trash.

Dedicated Beat-Man fans will recognize that the first two songs on this record are ones he’s recorded before. “Pero Te Amo” (But I Love You), sung in Spanish by Garcia, who also performed it on Blues Trash. The Baile Bruja Muerto version is more hard-edged, but Garcia’s voice is equally stunning.

Meanwhile, “Come Back Lord” is a Beat-Man rewrite of an obscure old ’60s garage-rock tune (“Come Back Bird” by an Abilene, Texas, band called Chevelle V), with lyrics about God, sex, and the devil.

At the moment, my favorite tracks are the fuzzed-out rocker “I Never Told You,” sung by Garcia; a cover of a Venom song, “Black Metal,” which has lyrics that seem personally tailored for Beat-Man (“Lay down your soul to the gods of rock ’n’ roll ...”); and Garcia’s take on the Costa Rica-born Chavela Vargas’ “Macorina,” another song she sings in Spanish.

The album ends with a trademark Beat-Man seven-minute spoken-word, sometimes obscene psychosexual religious rant/sermon called "My Name Reverend Beat-Man." Nobody does it like the Rev.

Let's do some videos!

And Rev. Beat-Man with Izobel Garcia