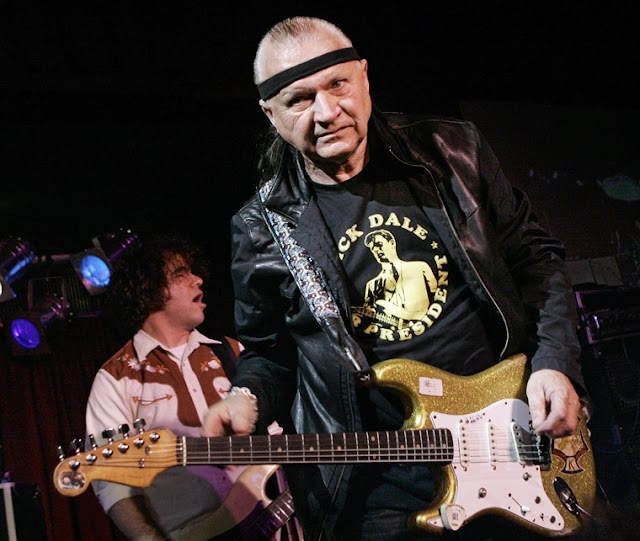 As everyone surely knows by now, Dick Dale, the longstanding King of the Surf Guitar, died last week.

And as everyone surely knows, his best-known song, "Misirlou" did not start with Pulp Fiction. Or even Dick Dale. Dale, whose grandparents were from Beirut, has said in interviews that he first heard the song being sung by some of his older relatives.

In her obit in The New Yorker, Amanda Petrusich wrote

Though it feels deeply American—it is so heavy with the energy of teen-agers, hot rods, and wide suburban boulevards—“Misirlou” is in fact an eastern Mediterranean folk song. The earliest recorded version is Greek, from 1927, and it was performed in a style known as rebetiko, itself a complex mélange of Orthodox chanting, indigenous Greek music, and the Ottoman songs that took root in Greek cities during the occupation. (A few years back, I spent some time travelling through Greece for a Times Magazine story about indigenous-Greek folk music; when I heard “Misirlou” playing from a 78-r.p.m. record on a gramophone on the outskirts of Athens—a later, slower version, recorded by an extraordinary oud player named Anton Abdelahad—I nearly choked on my cup of wine.)

So today, let's hear some "Misirlou" through the ages.

According to Wikipedia (which is always right, this 1927 recording by Greek singer Theodotos Demetriades is the first known recording of the song.


This is a late '40s Lebanese version by Maestro Clovis - Ya Amal that has been subtitled "Egyptian Girl."

Dick Dale wasn't the first American to record "Misirlou." Jazz xylophonist Jan August did this one in the mid 1940s.

"Miserlou" also became a klezmer standard. This version is by Klezmer Sefardi recorded in Madrid (Spain, not New Mexico) in 2011.

My friend Leslie just last night sent me a video version of the song by The Ukulele Orchestra of Great Britain. (She sent a Facebook video but I'm not sure how to embed that one on this blog. However, apparently the UOGB has recorded several versions.)

But there is not, and there will never be a version like the mighty Dick Dale's. R.I.P. Dick!