THROWBACK THURSDAY: Nobody Cares for Me 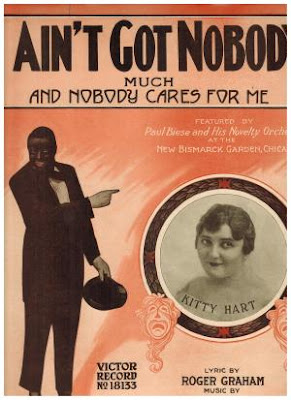 Last week I regaled and delighted you readers with a deep dive into the song "Just a Gigolo."

But to fans of Louis Prima & Keely Smith -- and David Lee Roth and The Village People, "Just a Gigolo" is just a half a song -- the other half being "I Ain't Got Nobody."

"I Ain't Got Nobody" was copyrighted in 1915 by lyricist Roger A. Graham and composer Spencer Williams. But authorship is disputed. The late St. Louis pianist Charles Warfield claimed that he'd actually written it with lyrics by Dave Peyton.

Whoever wrote it, the song had legs.

A singer named Marion Harris might have been the first to record it back in 1916,

A decade later Bessie Smith turned it into a blues song.

Louis Armstrong recorded the tune in 1929. (On a later, separate record, he also did a version of "Just a Gigolo.")

Fats Waller picked up the tempo on his mid '30s version. He'd also recorded instrumental versions of the song back in the '20s including one featuring Fats on pipe organ.

In the 40s, Bob Wills swung the song to Texas.

And just a few years ago, Patti Smith sang a retro take, probably closest to the one by fellow Smith Bessie, for the closing credits of HBO's Prohibition-era crime drama Boardwalk Empire.

To conclude, here is Louis Prima's first recording of the "Just a Gigolo/I Ain't Got Nobody" medley in 1945. I still prefer the one we know and love from the '50s, but this is where it started: