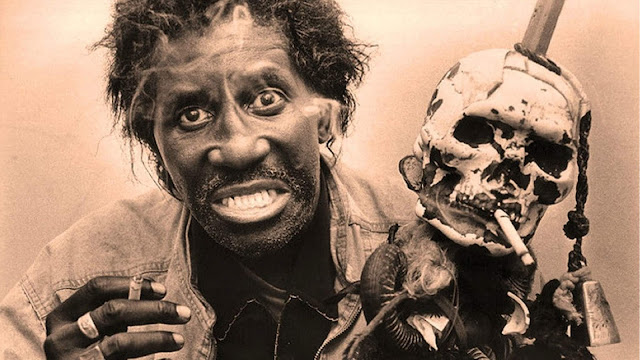 Ninety years ago today a baby was born. Born to scream.

That baby was Jalacy Hawkins, but rock 'n' rollers know him as Screamin' Jay.

I got a weird compliment from my friend Dave last last week. He was telling another friend about my radio show  and he said, "The most mainstream thing you'll hear on it is Screamin' Jay Hawkins."

I got to interview Screamin' Jay when he played Club West in Santa Fe in the mid '80s. The most memorable thing about that interview was Hawkins getting into an argument with a local musician who was part of his pick-up band.

His show was fantastic though.

Screamin' Jay died back in early 2000 at the age of 70. But his hoodoo spirit still haunts us.

I'm pretty sure most people reading this are quite familiar with Screamin' Jay's signature song, "I Put a Spell on You."  But he did a lot more than that. Here's a few of those ....

In his later years, Screamin' Jay was a wonderful interpreter of Tom Waits. He recorded "Heart Attack and Vine" and "Ice Cream Man," but this one is my favorite:

This is one of his early ones, whih I like even more than "Alligator Wine."

And here's a sweet tribute to one of my favorite stars of Twin Peaks.