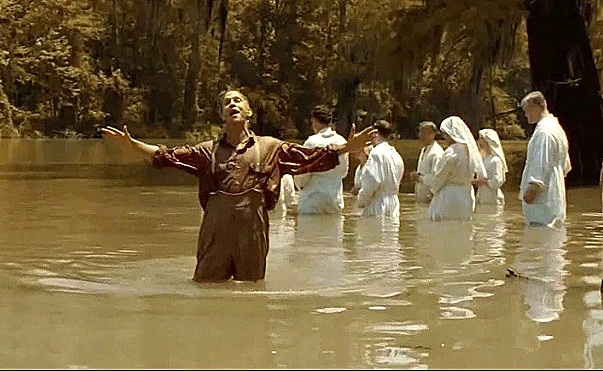 The Coen brothers' O Brother, Where Art Thou? (2000) is one of my favorite movies of all time and contains one of my favorite soundtracks of all times. And one of the most moving songs in that incredible soundtrack is Allison Krauss' version of "Down to the River to Pray," an a capella hymn on which she was backed by the First Baptist Church Choir of Whitehouse, Tennessee and several other singers who were involved in the film.

"River to Pray" was used in the funny, yet moving, baptism scene in O Brother  in which Delamar (Tim Blake Nelson) finds redemption  "The preacher says all my sins is warshed away, including that Piggly Wiggly I knocked over in Yazoo."

So where did this song come from?

The first evidence of the hymn is in a book, published in 1867 called  Slave Songs Of The United States, in which it's included under the title "The Good Old Way,"

One little problem: Though it was recorded many times in the 20th Century, I can't find any version before O Brother -- including the lyrics in the 1867 book -- that mentions "the river." It seems that before Alison Krauss, everyone was going down to the VALLEY to pray.

The first known recording of the song was in 1927 by the Price Family Sacred Singers on Okeh Records. I couldn't find a version of that on YouTube or anywhere else.

However, I did find "Moaner Let's Go Down in the Valley" by The Delta Big Four, a gospel group that included Mississippi blues pioneer Charlie Patton, recorded in 1929.

Eleven years later, Lead Belly got his hands on it.

Here's  live version of  Doc Watson's version from the 1960s

But it was Alison Krauss who took us to the river in O Brother Where Art Thou.