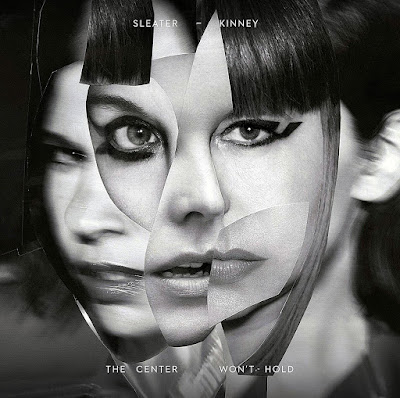 A version of this was published in The Santa Fe New Mexican
September 27, 2019

Faithful readers of my music screeds should certainly realize that probably 99 percent of my record reviews are favorable. Ripping into bad music by chirpy little pop stars or stinky old classic rockers years beyond their prime doesn’t bring me much joy. But more importantly, I’d much rather tell people about great music they might not be familiar with.

But there’s one big exception. That’s when some singer or band who I absolutely love releases a record that disappoints me — music that’s so unworthy of musicians who are capable of so much more. That’s when I dip my proverbial pen into the metaphorical poison ink.

You only hurt the ones you love.

So after intense deliberation and heavy sadness, I have decided to blast The Center Won’t Hold, the new album by one of my top favorite bands of the past couple of decades, Sleater-Kinney.

In case the above verbiage seems somewhat familiar to fans of this group, that’s because I was riffing on the announcement in July by longtime Sleater-Kinney drummer Janet Weiss that she was leaving the trio. “The band is heading in a new direction and it is time for me to move on,” she wrote on social media soon after S-K had finished recording The Center Won’t Hold.

A “new direction.” That’s an understatement for the ages.

Quick historical note: Sleater-Kinney first rose from the smoldering ashes of the great Riot Grrrl scare in Olympia, Washington, in the early 1990s. But there was something special about them. It didn’t take long for S-K to slip the surly bonds of the basic girl-punk sound.

Besides Weiss’ mighty drums, there was the scorching two-guitar attack of Corin Tucker and Carrie Brownstein (also of Portlandia fame). There was Tucker’s hopped-up banshee wail (the group’s greatest weapon). And they only seemed to get better with every new album.

They took a hiatus that lasted a decade or so shortly after releasing their 2005 album The Woods. I missed them dearly in their absence but their 2015 comeback album, No Cities to Love, was nothing short of amazing. (And their concert in Albuquerque in the spring of that year was one of the best shows I’ve ever seen.)

That’s one of the main things that saddens me so about the gloopy mess that is this latest record.

For reasons best known to Corin, Carrie, and Janet (if indeed the latter was part of this decision), they called in Annie Clark, better known among indie-rock circles (whatever that means these days) as St. Vincent. A lot of people, including many whose musical tastes I respect (my own beloved children among them), like her music. But I find it overly precious and boring and much of it soaked in synthy uselessness.

That’s fine. St. Annie can do what she wants. I just wish she hadn’t brought those dubious qualities to Sleater-Kinney’s new album. (Some may call me a stodgy old dinosaur, but I don’t give a flying darn.)

The dearly departed Weiss does play on the new album, but her normal power is diluted severely by synthesized beats. Also, the wild guitars of Tucker and Brownstein take a backseat to the electronic gizmos.

Seriously, had you played me this album without telling me who it was, I would not have guessed it was Sleater-Kinney.

The title song, which starts the album, is cruelly deceptive. It starts out slowly with clanking percussion and a synthesized bass line. The vocals — I think it’s Tucker — seem detached to the rest of the musical backdrop. Then about two-thirds of the way into the song, the old Sleater-Kinney seems to come back to life for the final minute of the track.

But it’s just a tease. By the next number, “Hurry on Home,” the new, artsy, synth-pop S-K is back and, for the most part, here to stay.

I have to admit there are a couple of tunes I actually like. “Bad Dance” comes dangerously close to rock ‘n’ roll. “And if the world is ending now/then let’s dance, the bad dance/we’ve been rehearsing our whole lives,” Brownstein sings. It’s definitely the sexiest song on the album. “Come over here and show me/that you crave a little more/Let me defang you/and defile you on the floor …”

And despite the fact that it’s just as synthy as the worst songs on the album and doesn’t really sound like the Sleater-Kinney I revere, the upbeat “Love” is so catchy it’s addictive. It sounds almost faux-’80s New Wave, maybe The Go-Gos high on pep pills and hair spray. And, somewhat ironically, it’s about S-K’s early history, even dropping the names of some of their early albums.

I’m glad the brave women of Sleater-Kinney no longer have to sleep in their van, as they sing about in “Love.” But I sure hope they turn the amp back to 10 and return to the basic sound that brought us to them in the first place.

Here's the best song from this sub-par album